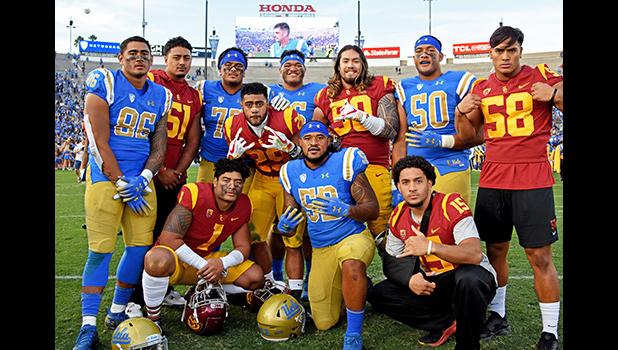 PASADENA, Calif. (AP) — Joshua Kelley has been watching the UCLA-USC rivalry since he was 8 years old. On Saturday, he cemented his legacy in the Crosstown Showdown's history.

The junior running back rushed for 289 yards on 40 carries and scored two touchdowns to lead the Bruins to a 34-27 victory over the Trojans at the Rose Bowl.

It is the third-most rushing yards in a game in UCLA history and the most by a Bruins back against the Trojans. Gaston Green had the previous mark with 224 yards on 39 carries in 1986.

"It was crazy and finally I was out there and wanted to embrace every single moment of it," said Kelley, who transferred from UC Davis. "It was a crazy experience. I sure enjoyed it and our team did too."

Kelley was surprised by the number of carries he had but UCLA coach Chip Kelly did not mind giving his back a heavy workload.

USC (5-6, 4-5) mounted one final drive and got to the UCLA 29 but JT Daniels' fourth-down pass was incomplete with 32 seconds remaining.

"Coming into the game, we had a lot of respect for Joshua. He's a very physical back and a very good runner," Trojans coach Clay Helton said. "I thought they did a nice job tonight of being able to get the ball outside on the perimeter and bouncing the ball outside."

Wilton Speight completed 13 of 22 passes for 166 yards and a touchdown. He also ran for a score as UCLA broke a three-game losing streak to its crosstown rival.

Daniels threw for 337 yards and two touchdowns as he completed 20 of 34 passes, but the freshman had a costly fourth-quarter interception that led to Molson's second field goal. USC was held to 80 yards of offense in the second half with most of it coming in the fourth quarter.

"I was trying to throw it away. It got away from me. That's inexcusable," said Daniels of the second pick.

Michael Pittman Jr. had 106 yards on seven receptions and Amon-Ra St. Brown added six catches for 98 yards. The Trojans were 4-2 at midseason but have dropped four of their last five.

After USC scored on a 46-yard field goal by Michael Brown on its opening possession, UCLA would score touchdowns on its first two. Speight threw a perfect 33-yard pass to Theo Howard that the junior receiver was able to haul in near the back of the end zone while being covered by Iman Marshall.

Speight then got his first collegiate rushing touchdown on a 4-yard scramble to extend the Bruins' lead to 11. The key play of that drive was a 59-yard gain by Kelley down the left sideline to the USC 9.

The Trojans would take back momentum with a couple big plays on special teams. A 44-yard touchdown by St. Brown from Daniels drew them within 14-10 late in the first quarter. The TD came right after Erik Krommenhoek got a first down on a direct snap off a fake punt.

USC's punt team then gave it the lead early in the second quarter when Jake Russell blocked a Stefan Flintoft punt at the UCLA 5 and Devon Williams ran it in.

The Bruins answered right back with a Kelley 1-yard score but the Trojans would lead 24-21 at halftime after Velus Jones caught a receiver screen, got a pair of blocks from Pittman and went 45 yards.

NOT A BIG DRAW

The USC-UCLA game is usually one of the biggest dates each year on the Los Angeles sporting calendar, but Saturday's contest drew only 57,116. That is the lowest attended crosstown game since 1950, when both teams played at the LA Memorial Coliseum.

USC: Clay Helton's future as coach could be precarious with the late-season collapse and bowl hopes hanging by a thread.

"The job is if you win, people are going to pat you on the back, and if you lose, you know they're going to get after you," Helton said. "It rolls off my back, so I'm not worried about it."

UCLA: Kelly has his signature win in his first year leading the Bruins, which should give them momentum with the early signing period less than a month away.

"It was a deserved victory. They didn't kind of slide into it or backdoor into this win," Kelly said. "There's no question in this game that we played hard. We played harder, and that's why we won the football game."

USC: Closes out the regular season hosting No. 4 Notre Dame.

UCLA: Ends its season on Saturday against Stanford.