Pasifika artist offers caskets with a difference: Going out in style 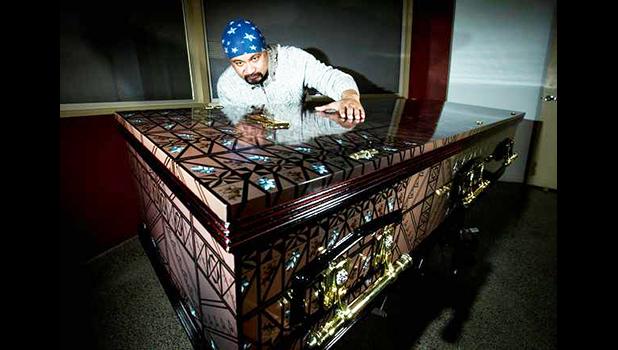 Auckland, NEW ZEALAND — It was at the funeral of his own mother that inspired an artist's idea to create something special for others - cultural-inspired designs on funeral caskets. Pomare F Uelese Amosa, a sign-writer in Auckland, travelled to Samoa two years ago to farewell his mother, Fa'alua Uelese Amosa.

The high cost of her plain casket got him thinking about ways he could change the look of a casket in a way that reflected Pasifika culture.

"I let my mum go in a boring-looking box. But the idea for a funeral is to celebrate our loved one's life.

"I wanted to make something so they can go out in style - something different. If I had this idea back then, I would've done it for my old lady.''

Amosa had always loved art and went on to study at the Leulumoega School of Fine Arts, in Samoa, before moving to New Zealand; where he studied graphic design at Whitireia in Wellington.

He is now a signage specialist at digital printing company 3A Total Solutions, in Manukau, where he also helps to design and install signs and artistic wraps seen on vehicles and aircraft.

A few months ago, he created a wrap for a casket and has since been in touch with a number of funeral homes interested in his work.

Funeral director Sam Achary, of Ann's Funeral Home in Wiri, was among those to approach him.

"Sam said to me: 'I have a box here, it's been sitting here for many years.'

The patterns he has since created for the specialist caskets have reflected those seen on traditional Tongan tapa cloth or designs.

He also hopes to incorporate Samoan, Māori or other Pasifika-inspired designs for respective families who request them.