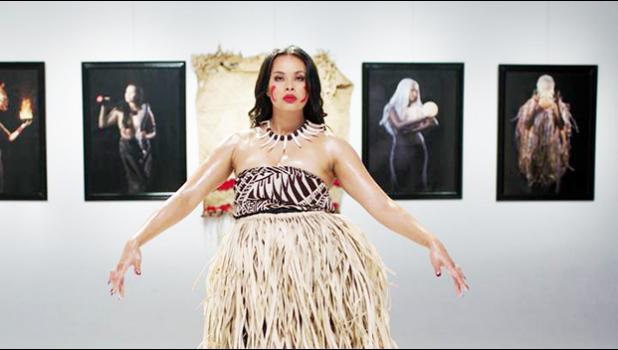 Auckland, NEW ZEALAND — A new Pacific-themed drama and horror television series has been created for New Zealand. It is the country's first show to be written, directed, produced and crewed entirely by people of the Moana.

The series, Teine Sā - The Ancient Ones, has taken a modern-day twist on ancient myths and legends, and the episodes are delivered by a raft of new Moana writers and directors, under the eye of internationally acclaimed directors Toa Fraser and Sima Urale.

Each episode focuses on a different traditional Pacific tale that has been passed down through the generations.

The first episode, self-titled Teine Sā, was directed by first-time TV series director Mario Faumui who said although it was an emotional journey for him, he was pleased with the product and the experience.

"There's a bigger picture than just me directing this project," he said.

"There's now a language in the film industry that every other Pasifika [creator] can reference and see examples of, and say to themselves that they too can be a part of this scene."

Faumui was not the only crew member making a debut. Young actor Petmal Petelo Lam said acting in the introduction episode was his first on-screen appearance, and he felt proud to not only represent his Samoan heritage, but also the LGBTQI+ community.

"Representation is everything, especially for our fa'afafine, transgender, queer people, and so I had to make sure that I delivered appropriately and served not only Samoan culture, but the fa'afafine that are coming next, and also to honour those who have come before me," Lam said.

This is also the first TV series in New Zealand to feature a Melanesian story, written, directed and crewed by Melanesian women.

The episode, titled Hiama, was helmed by SPADA Young Director of the Year Matasila Freshwater, who wrote and directed a story based on one of her family's own stories.

Experienced actress Frankie Adams stars in all five episodes, playing a different character in each set, and is the protagonist in most of the stories.

She explained that although learning five different characters initially sounded challenging, finding similarities between them helped.

"Each of the characters all had their strengths, and actually some of them I could relate to.

"What was really beautiful was what linked all my characters together - like, a lot of them had experienced trauma, or are still finding their femininity or womanhood, and then they were all quite smart, clever and charming. And so once I found the similarities, it was easier to see who they were in their own worlds," Adams said.

Faumui explained that the concept of Teine Sā came from executive producer Lisa Taouma, who launched the Polynesian online community Coconet, which is where viewers can watch the episodes.

"Lisa was inspired by the era of all these thrillers and dramas coming through Netflix, and for her she saw potential in our Pacific stories told in those genres and in that format."

The team was confident they knew their audience, and had a fresh take on the favourite stories.

"As a production team who are all Pasifika, we often talk about how the stories are scarier when we hear it verbally from our mothers, grandmothers, relatives and so forth, who would tell us these stories in the middle of the night. So we wanted to be able to portray that on screen," Faumui said.

"What's fun about telling these myths and legends this time round is that we've made the storyline contemporary and it's all set in modern day.

"We had the audience in mind and were confident that our content would be attract a young Pasifika (New Zealand Pacific community) group, especially for those who are trying to get in touch with their culture again," he explained.

"We all know the pan-Pacific tale of Sina and the Eel, which in short is about the love between Sina and her pet eel, so the twist with that story is we've added Tinder into the mix, so that it's relatable to today's generation."