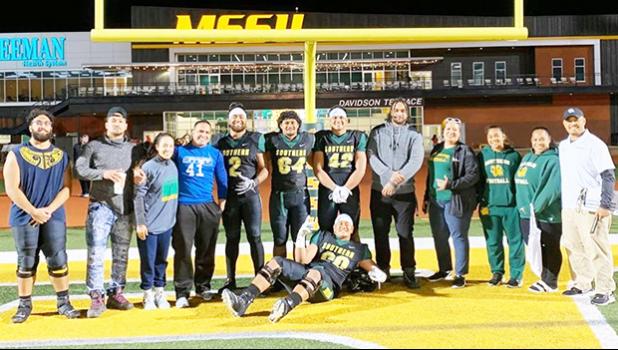 Three Polys are on staff - one from Fagatogo, another from Laulii
By
Samoa News staff
reporters@samoanews.com

Next month, Coach Sims, along with MSSU’s Running Back Coach & International Recruiting Coordinator, Keiki Misipeka; and Football Academic Support Specialist Rachel Jennings will be traveling to Hawaii and American Samoa in search of young people who want to attend MSSU as a student, a student-athlete, or as a member of the Show-Me Gold Officer Training Program, through the US National Guard.

Coach Sims, having spent over 24 years coaching football, has quite an impressive resume. He has sent 54 players to the NFL and coached in 4 National Championships, including 2 in the last 3 years.

In his first year as Head Coach at Missouri Southern, Coach Sims has expressed interest in having more Polynesian players on the roster. He hired Keiki Misipeka, a Samoana HS graduate and Fagatogo native, whom he previously had on staff with his 2016 national championship team at Garden City Community College.

Sims also hired Frank Muagututi’a, (originally from Salelologa, Samoa but grew up in California), who previously worked as a recruiter for the University of Utah Utes in the PAC 12 division.

Finally, Sims hired Rachel Jennings (a former teacher at Samoana HS and native of Lauli’i, AS) to work as an academic advisor with just football student-athletes. Hiring a trio of staff members of Polynesian descent allows Sims to better recruit Polynesian student-athletes, and help them transition from high school in the islands to a university in the mainland.

The move by Sims has re-united Keiki Misipeka and Rachel Jennings, who previously worked with Brian and Brandon Smart as part of Fieldhouse 100 in American Samoa. After the Smart brothers left the territory, Misipeka and Jennings created their own non-profit, Pasefika International Sports Alliance (PISA), which helped local student-athletes pinpoint and take advantage of scholarship opportunities to attend college through sports - and receive a free education.

Misipeka and Jennings both have experience in working closely with local coaches, school counselors, and the students’ families - and that makes their inclusion in the Missouri Southern State University Football staff, vital for the recruitment of American Samoans.

In his short time at Missouri Southern, Misipeka has worked with the University’s President, Dr. Alan Marble to include all U.S. territories - including American Samoa and the state of Hawai’i - under the Lion Pride scholarship, which allows residents of these states and territories to receive in-state tuition, saving future students money in tuition costs. This includes students from American Samoa who wish to remain on-island but want to earn a degree. MSSU offers multiple online only degree programs.

There are currently 13 Polynesian student-athletes at Missouri Southern, including 4 on the women’s volleyball team - who are all from Hawai’i - and nine on the football squad. Six football players came directly from American Samoa:

These young men have already made a huge impact as a part of the football program, sharing their island culture with their teammates,” Misipeka told Samoa News over the weekend. The next recruiting cycle is promising.

Samoa News understands that several athletes with ties to American Samoa and Hawai’I have already been identified, and some have been offered scholarships.

With their upcoming trip to American Samoa on Dec. 5th, Coach Sims, Coach Keiki, and Ms. Rachel are looking forward to sharing with local residents, everything about Missouri Southern State University - its academic programs, and what it takes to qualify for the football team. They will be providing workshops for people interested in learning more about the university. Details about these workshops will be provided at a later date.