A first for a Samoa woman 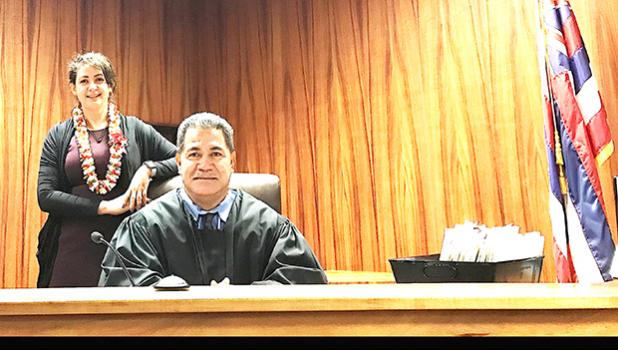 Samoa News congratulates the first woman born and raised in Apia, Samoa to be sworn in to the Hawai’i State Bar and the United States District Court. Saisamoa F. Grey Price is now Law Clerk to the Honorable Fa'auuga L. To'oto'o, Judge in the First Circuit Court of the State of Hawai’i. Her swearing in was administered at the Hawaii State Capitol Senate Chambers on Nov. 17, 2017.

Saisamoa’s higher education was at ASCC before going on to the University of Hawaii at Manoa. She earned her law degree at the William S. Richardson School of Law, also at UH Manoa.

Saisamoa said she is grateful to all her family and friends for their support — both those at home and in Hawaii.  And “to my Judge, the Honorable Fa'auuga L. To'oto'o for his mentorship the past 3 years. Fa'afetai, fa'afetai tele lava le fai tama, fa'afetai le alofa, fa'afetai le tapua'i.”

She told Samoa News, “Fa'afetai tele lava i le susuga Rev. Ripley and the American Samoa Scholarship Committee, and le afioga Tautolo Agaoleatu Charlie Tautolo and the McDonald's Scholarship Committee for recognizing my potential and giving me the financial opportunity to pursue a higher education in Hawai’i many years ago.”

She dedicates her achievement to her late grandmother Toeasonaimoamoa Christina Grey (known as Toeaso) and the meaning of her name is something Saisamoa has strived to live by. “To quote our former Head of State Tui Atua Tupua Tamasese, ‘E fa'i o Amouta, ae tali Amotai, ma le toe aso nai Moamoa’ (if you win in Amouta then there is Amotai, but you have to keep in mind the final tournament in Moamoa). The main message of this saying is: we cannot be carried away by the moment because the final day of reckoning awaits."

Saisamoa joins the legal profession in Hawai’i where there are approximately 10 attorneys of Samoan ancestry in the state.

“I never lost sight of the ultimate goal… to become an American attorney and the first born and raised Samoan woman to do so. I have always wanted to be a lawyer — since I was 8 years old,” she said.