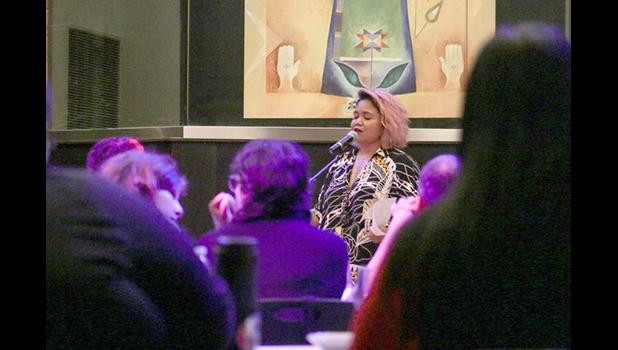 Siagatonu’s efforts focus on diverse issues like racial justice, LGBTQ+ rights, gender equity and climate change. Her efforts as a poet and activist in her Pacific Islander community led her to receive President Obama’s Champion of Change Award in 2012, according to her website. She was also a speaker during the 2015 United Nations Conference on Climate Change.

Women*s Center Director Amy Sharp said this annual event was inspired by visitors from American Samoa in September 2018. Various groups in the university wanted to honor their visit and provide an opportunity to engage diverse communities.

“We’re recognizing indigenous people as being still here and honoring indigenous women as being very resilient and [an] important part of the fabric of our community,” said Faith Price, director of Native American Student Services.

Price said the event was organized and funded by several groups including the Division of Student Affairs, the College of Education, the ASWSU Gender and Sexuality Alliance, the Women*s Center, the Native American Student Services and the School of Languages, Cultures, and Race.

Honoring Indigenous Women is a kick-off to Indigenous People’s Day on Oct. 14, she said.

“We’re not just celebrating our existence and celebrating those leaders and women of indigenous backgrounds, but we’re also asking the hard questions and figuring out together: what does that honor look like in real-time?” Siagatonu said.

The event commenced with Siagatonu’s meet-and-greet at the Asian American and Pacific Islander Student Center. Siagatonu said she was honored to be a guest because her college experience helped shape her identity.

Read more at The Daily Evergreen