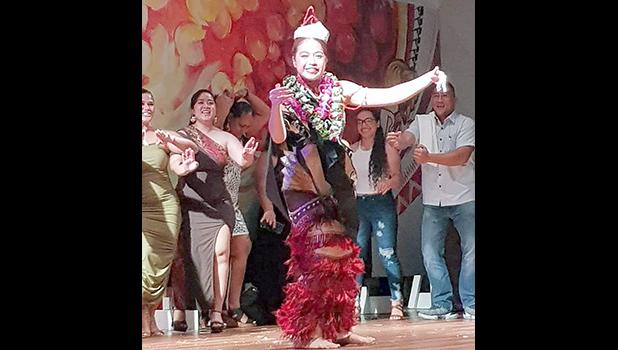 Pago Pago, AMERICAN SAMOA — This year’s Miss American Samoa pageant was perhaps the best, as far as overwhelming family and village support. Each of the five contestants had a strong cheering squad that kept them going all night long.

The crowd was kept entertained by host, Will Thompson, who did a wonderful job.

Epifania Petelo, sponsored by Iron Crew Health and Fitness, is the newly crowned Miss American Samoa 2019-2020. She is pictured during the sarong category of the sold-out pageant last Friday evening.  [photo: B. Chen]

The gold sponsor was Tautua Mo Oe (TMO) and AVE Designz was the silver sponsor.

Tauaitala Leasiolagi of Matuu and Faganeanea — sponsored by Lote’s Auto Shop — during the sarong category of the Miss American Samoa pageant last Friday evening where she was 4th runner up. [photo: B. Chen]

Outgoing Miss American Samoa, Magalita Johnson played an active role, performing the opening number with the contestants, and then singing a special song for the crowd. She also delivered her farewell remarks and performed her final siva as the Miss American Samoa.

Then it was on to the talent category, the most exciting part of the night, according to pageant goers.

Miss Vatia kicked it off with a beautiful song. Menorah sang like an angel in a gold-sequined skirt that later came off to reveal hot pink genie pants that were perfect for her dance routine that followed. It was definitely a crowd pleaser.

Epifania’s talent displayed her strength and agility, with the use of dumbbells and boxing gloves. She also demonstrated how to squeeze fresh coconut milk, and then wowed the crowd with a deadlift.

Brenda was up next, with her “Dance Fitness” session that engaged the crowd and even got emcee Will to bust out a couple of moves.

Third runner up in this year’s Miss American Samoa pageant, Brenda Foleni of Amouli, sponsored by J-Len Ts. She is pictured striking a pose with her traditionally inspired wear. [photo: B. Chen]

The final talent of the night was a monologue on sexual violence by Tauaitala, who captured the crowd’s attention by touching on a subject that has been discussed and debated more now, than ever, in the community.

The final two categories were definitely the highlight of the event. Miss Vatia came out first with a gown that paid homage to Queen Salamasina. And it was beautiful. The overlay was a siapo adorned by dozens of glossy “eye of the coconut” filled with red lopa. When the overlay came off, a yellow painted siapo was revealed. The gown featured cut out areas in the legs that were filled in with tifa shells and strips of sennit. The matching headpiece was made of tifa shells, afa, and siapo.

For her interview question, Menora was asked about a program to empower girls on island. Her response was simple. She referred to a ministry that she is a part of, and invited girls to join or otherwise be part of a similar ministry.

It was a dress inspired by Queen Salamasina herself! Miss Vatia, Menorah Justine Moemoe Samia — sponsored by Betty Gaoteote and friends — was the first runner up at this year’s Miss American Samoa pageant, hosted last Friday evening at the ASCC Multi-Purpose Auditorium. [photo: B. Chen]

For her traditionally inspired wear, Jonica donned an outfit that was a “matter of her heart”, Her tuiga was made of three elements to reflect her spirit, soul, and the world. The outfit was made of laufala, afa, siapo, tifa shells, and feathers, among other things. When asked about what she would do to address what is lacking in the local education system, Jonica suggested that the community come together and provide supplies for the local schools. She said teachers are the most important people in American Samoa.

Jonica Tuiteleleapaga — who represented Utulei village and was sponsored by family and friends — was the 2nd runner up in this year’s Miss American Samoa pageant. She is pictured in her Traditionally Inspired Wear. [photo: B. Chen]

Epifania’s traditionally inspired wear featured an overlay that was embellished with lights. The customized dress was made of woven laufala, ie toga, fala lili’i and papa fala. To complete the look, red sega feathers and red lopa were added.

Her winning answer for the interview portion had the crowd roaring. When asked about the biggest issue facing women today, Jonica said domestic violence. She said there is a need to “stop the silence” and remember that “we are here”. She said collaborations need to be made with Alliances and programs available to the community.

Brenda came on stage with an ‘eagle’ inspired number. Her siapo outfit with a high slit was accessorized by a red cover featuring cooked avapui leaves. Her headpiece included the hair of women in her family. Her interview question had to do with ways to address the rising sea levels. Brenda said she would use her face and voice to be an advocate for the issue.

Finally, Tauaitala came out completely covered with tauaga (coconut husk). The underlying outfit was red and black, cut to a mermaid fit. A tuiga completed the look. For her interview question, Tauaitala spoke about her parents when asked about what the pageant theme meant to her.

The following is the breakdown of the placements: