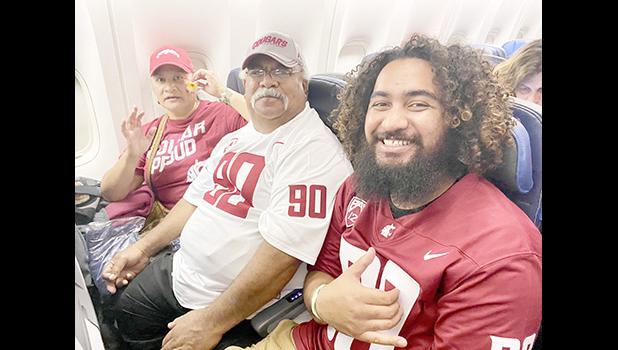 Honolulu, HAWAII — Samoa News was not invited to cover the recent revival of the Hula Bowl College All-Star Game this week... but we are so well connected we did score the absolute ‘bestest’ human interest story.

Off to the Oz Gold Coast for a rugby career which morphed into an offer from Riverside Community College to play American gridiron. With no aiga Samoa in Riverside, Misiona’s father turned to Seventh Day Adventist missionary, Pastor Fred Toailoa.

After a year starring at Riverside CC, Misiona was offered a scholarship to play for the prestigious Washington State University in the big time Pac 12. Two years of superb play for the Cougars and Misiona is a Hula Bowl All-Star.

Because of work obligations, the Toailoa Family flew from LAX on the first flight Hula Bowl Sunday, returning on the last flight immediately after the game at 10:50p.m.
Fa’a Samoa, fa’a commitment mo le taimaiti.

Note: Marie is Archie Soliai’s sister; Mila is from Lauli’i, Samoa; and, Merlen is related to everybody and is an all around great guy.