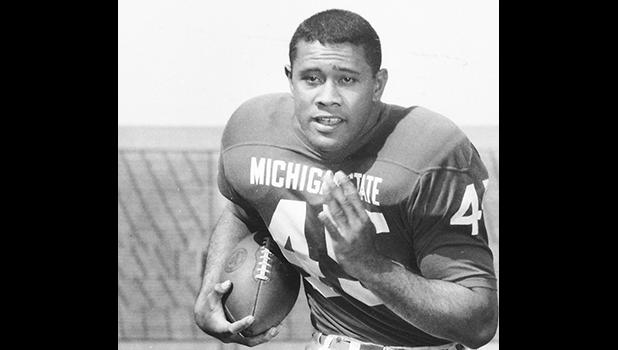 EAST LANSING - Bob Apisa was 7 years old when he left his native American Samoa for Hawaii.

One of 11 children in the family, he didn't speak English and had never seen electricity. So, the bright lights at night in Honolulu sparked a profound thought.

Apisa turned to his brother George and, in Samoan, said 'there must be hundreds and hundreds of kerosene lanterns out there.'"

"He kind of smirked and he says 'no, that's not kerosene lanterns, that's electricity,'" Apisa recalled. "So, in 1952 Thomas Edison came to my life."

A dozen years after Apisa first confronted electricity, he made the 4,000-plus mile journey to Michigan State as a scholarship football player. And, a half-century after he finished his career with the Spartans, Apisa stepped into the Wharton Center on campus last Thursday evening in a black suit, white shirt and silver-and-white pocket square to match his tie.

The crowd was seated and Apisa was presented in the spotlight on stage as one of five members inducted into the 2017 class of the Michigan State Athletics Hall of Fame, which began in 1992.

"Sometimes people wait their turn and sometimes years go by and thinking about it, in 25 years, I made it, I made it," Apisa, fighting back tears, said before the ceremony last Thursday. "The history of Michigan State, with all the great players, it's a great treat for me."

Apisa was a two-time All-American fullback and helped Michigan State to national championships in 1965 and 1966. Not bad for a guy who wasn't even supposed to set foot in the Midwest.

His mom was a USC fan and she wanted him to go to school in Los Angeles. But, finalizing a college scholarship was a face-to-face transaction at the time and when Apisa was ready to sign, there was nobody at his high school from USC. The Trojans' recruiter missed his flight to Hawaii, but there was a representative from Michigan State. Apisa, assuming USC decided to go in a different direction, was on the spot.

"I had to make a choice," he said. "My mom wanted me to play for the Trojans. Well, I became a Spartan."

Apisa arrived at Michigan State during a turbulent time in America. Jim Crow laws forced racial segregation in the South, but Michigan State coach Duffy Daugherty was a leader in integrating college football. He signed prominent black players from the South, including two-time All-Americans Bubba Smith and George Webster and quarterback Jimmy Raye.

"We knew the doors were open for anybody," Apisa said. "They didn't care where you came from, (Daugherty) didn't see color, he just saw talent."