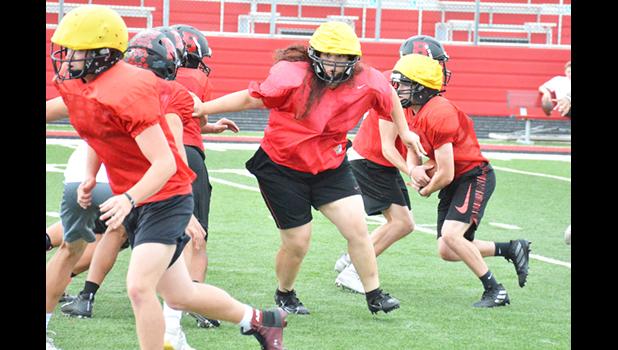 Bluffton, INDIANA — Born and raised in American Samoa until 2015, Julia Mackenzie remembers the day she told her mom that she was on the Bluffton football team.

“We were at Starbucks and my mom had her coffee, so she was happy,” said Mackenzie, reminiscing about that day this past summer. “I actually just told her I was the kicker.”

Mom had reservations, of course. But kicker? That can’t be too bad.

Turns out, Mackenzie wasn’t the kicker. She was suiting up as a defensive lineman for the Tigers, in the trenches battling it out in physical one-on-one matchups with a bunch of boys.

“I eventually told her the whole truth after one of our two-a-day practices,” Mackenzie said. “She just thought I was working out at school. She wasn’t mad, but she was definitely worried.”

Football is not a new passion for Mackenzie. As a youth growing up in American Samoa, she remembers watching NFL games with great interest. Her uncles played football, her grandfather dabbled in rugby. She was immersed in physical sports through her family. She joined some flag football leagues in American Samoa, but never tackle.

After two years living in Hawaii, Mackenzie moved with her grandma and mother to rural Indiana in 2017. It was a big adjustment, but one Mackenzie took in stride.

“It was very shocking,” Mackenzie said of the move. “But I like the people. I have never been in a place where there are so many cornfields. I am used to water and beaches.”

Mackenzie settled in at Bluffton and joined the track team as a discus thrower. She has developed into one of the top throwers in the ACAC. She also got her fix of football during Homecoming with the Powderpuff game, but it wasn’t enough.

“At track, Julia would make these offhand comments about wanting to play football,” said Bluffton football coach Brent Kunkel, who also coaches track. “She told me last spring that she was going to do it. I told her she was welcome, but she was not going to get any special treatment.”

Turns out, that was exactly what Mackenzie was looking for. In a new environment thousands of miles from the only home she ever knew, the junior found that commonality she had shared wherever she was – football.

Concern over how she would be treated evaporated rapidly. After some initial hesitancy during blocking drills and hand placement, Mackenzie’s teammates began to treat her as any other player.

You can also check football tips and interesting trivia at GameDayr.