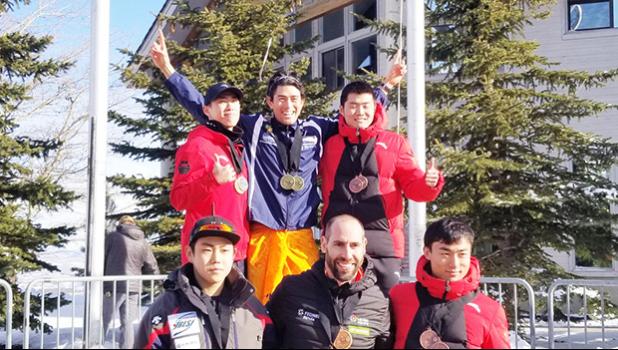 Utah Olympic Park — The Samoan ie lavalava tied around Nathan Ikon Crumpton’s waist set him apart from the other sliders bundled up in puffy jackets and snow pants at the awards ceremony for the North America’s Cup skeleton races held here this week. Bright orange and floral, it was eye-catching — but not nearly as much so as his results.

(According to Wikipedia Skeleton is a winter sliding sport in which a person rides a small sled, known as a skeleton bobsled (or -sleigh), down a frozen track while lying face down and head-first. ... Unlike other sliding sports of bobsleigh and luge, the race always involves single riders.)

Three times the notes of the little-known American Samoa national anthem chimed over Olympic Park on Tuesday because of Crumpton. The Park City resident tied for first in Monday’s opening race, making him the first American Samoan athlete to win a gold medal in a winter sport. He followed that up with outright wins in the races held Monday afternoon and Tuesday morning.

More than the medals around his neck and perhaps even more than a place in history, what really mattered to Crumpton and many of the athletes racing this week is how many points they accumulated toward their World Cup standing. Though the NorAm Cup races are two tiers below the World Cup, the circuit can serve as an incubator for aspiring Olympians — especially ones competing for nations not known for their winter sports prowess.