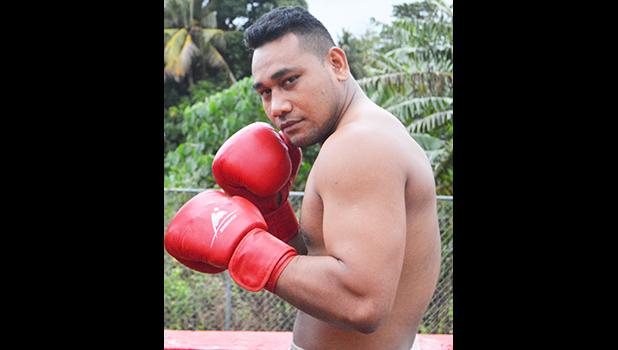 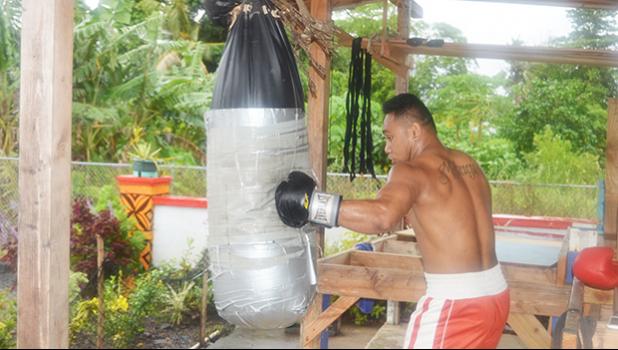 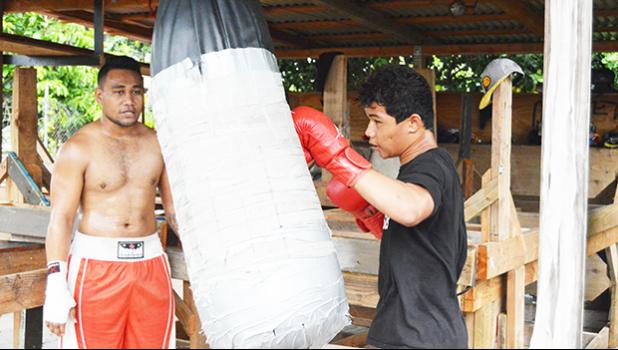 Samoa’s gold medalist Petelo Matagi will no longer fight for his home country Samoa in the near future, he’s now switching his boxing career to American Samoa, the place where he started his boxing career many years ago.

“This is where I belong. This is where I started my boxing career many years ago and I want to come here to give back something to American Samoa and to work together one more time with my Coach, the man that changed my life and brought me to the stage where I am now”, said Matagi, during an exclusive interview with Samoa News last week, after he won his first comeback fight for American Samoa, with an outstanding performance, when he knocked down his opponent Tesimale Fatu-Taua’i in the first round of their three-round bout, during the 2Samoas Battle held last week.

The Matagi vs. Fatu-Tauai’s bout was the main event for the 2Samoas Battle between Samoa and American Samoa, where American Samoa’s boxing team decisively won the Championship Trophy for this year’s International Boxing Championship by winning all five special amateur bouts of the night.

Matagi’s decision to come back to American Samoa was praised by his long time Coach, Sala Sanele Etuale.

When asked by Samoa News, Sala said that he’s looking forward to working with Matagi and to building a solid relationship between coach and fighter, because he wants to prepare him for future championships and to let him share his talent with our young and future fighters in the territory.

“It was a great move by Matagi to come back to us and to give something back to American Samoa, the place where he started his boxing career. This is the moment that I was looking forward to many years ago when he left American Samoa and to go back to his family in Samoa, is for him to come back and fight for us,” said Sala.

“I trained him when he was just a little boy, and I still remember the first time when he stepped inside the ring, I saw him struggle in the ring and he also lost his first two amateur matches, I still remember that time, but after few months since he started as a young fighter, I saw something inside him that gives me the confidence that someday he will be champion, he has a big heart inside him,” the boxing coach recalled.

Matagi was Samoa’s top heavyweight contender and he won many gold medals for Samoa, including 3 gold from previous Oceania Championship and 1 gold from the 2011 South Pacific Games in Noumea, New Caledonia.

His name was all over the island through the media coverage when he qualified to the 2016 Olympic Games in Rio, a huge step in his boxing career, but unfortunately he did not attend.

His last fight for Samoa was during February of last year’s Battle of the Pacific, where he proved to his fans and to the Pacific that he still has the power and speed, when he knocked down Tonga’s future champion Kanongata’a Atonio to win the Pacific title.

One news agency in Samoa described Matagi’s speed and power as Samoa’s next Joseph Parker, while another described his power left hook as another David Tua.

According to Sala, it was after Matagi’s last international fight — Battle of the Pacific — in February of last year when he received a telephone called from Matagi, telling him that he wanted to move back to American Samoa.

“When I heard about Matagi’s plan to move back to American Samoa, I was excited because I knew that this was something he promised me many years ago, that he will come back to play for American Samoa”, said Sala.

“He’s still has the speed and power to knock down his opponent, and he proved that last week during the 2Samoas Battle when he knocked down Tesimale Fatu-Taua’i in the beginning of the first round of their main event. I will continue to help him to fulfill his dream of winning a gold medal for American Samoa in future International championship,” he said.

Matagi told Samoa News that he will do everything he can to help our young fighters and to train hard to represent American Samoa in future international championships.

“I was thinking that if I can’t make it during my boxing time, may be God will bless me with a good family and my kids will come and play for American Samoa, or I will do something else to offer my help, but I thank God for giving me this opportunity to come here to offer my assistance while I’m still young and active,” he concluded.

Matagi is a humble and soft-spoken young man who prefers to let his hands do the talking. He sees a future in boxing and ultimately wants to become World Champion in the future. He is now fighting under the umbrella of the American Samoa Boxing Federation (ASBF) and at the same time helping the ASBF coaching staff to train our young fighters.