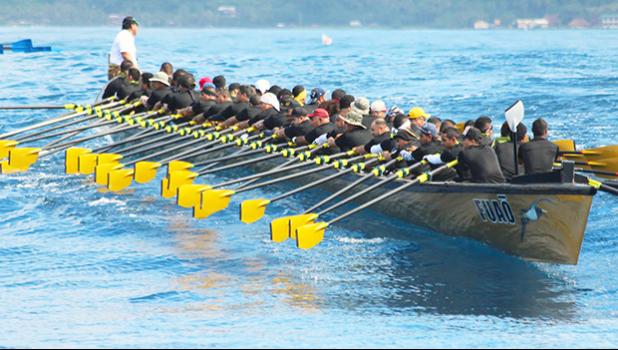 Currently, the 2017 Flag Day Fautasi Regatta — with heats and the following day the final Championship Race — is set for Wednesday and Thursday, although according to the Annual Flag Day Schedule, published in the Samoa News yesterday it’s “TBA”. There are 14 faustasi said to be registered to race, with several villages fielding two boats.

Lt. Gov. Lemanu P. Mauga during a cabinet meeting two weeks ago said that the race, this year, would be dependent on the ocean tide, adding that in past events, the ocean usually gets rough when the race is ready to get underway. He then jokingly added, “So let’s not reveal at this time the date of the race so that the ocean tide won’t know in advance.”

However, a Fautasi Committee meeting with captains or teams’ representatives yesterday took a leap of faith and finalized the rules of the race as well as picked the numbers for the lineup at the starting point, and chose a day to start the regatta.

Samoa News was unable to obtain specific information of the meeting’s results, but, based on information Samoa News received from one of the villages that is racing a fautasi, the heats are scheduled to happen on Wednesday, depending on the weather.

There are basically 3 heats happening, although the committee is saying there are only two heats, with 9 fautasi in the first heat, but that’s split into two races with ‘best time’ determining their final standings in the heat, and whether they make it or not to the final competition.

The Sinapioa is being noted as Aua’s second boat; while the God is Great fautasi is recognized as ‘independent’. Last year, it raced as a fautasi out of Faleniu, the only land locked village to race a fautasi, but not this year.

This brings the total of fautasi racing in the heats of le faigamea i le tai to 14. The final race, currently set for Thursday is for the top 5 — determined by their racing times during the heats.

It is unknown if the heats will take place within the harbor, or the starting line will be where the final race usually begins — outside the harbor towards the airport side. Again, it probably will be an issue of weather.

There is no fautasi from Samoa in this year’s annual Flag Day Fautasi Regatta.

The 2017 Flag Day theme is “Tupulaga mo a Taeao (or Youth for Tomorrow) and began yesterday at the Su’igaula o le Atuvasa at Utulei Beach with a trade fair, farm fair, and health fair. The fairs will continue until Thursday, Apr. 13, and nothing is scheduled for Friday, which is an ASG holiday and Good Friday.

Saturday, Apr. 14, is showing on the schedule as an evening boxing event only, with Sunday for the Flag Day service and Monday the 117th Annual Flag Day Celebration at the Veterans Memorial Stadium — which would basically be another ASG holiday.