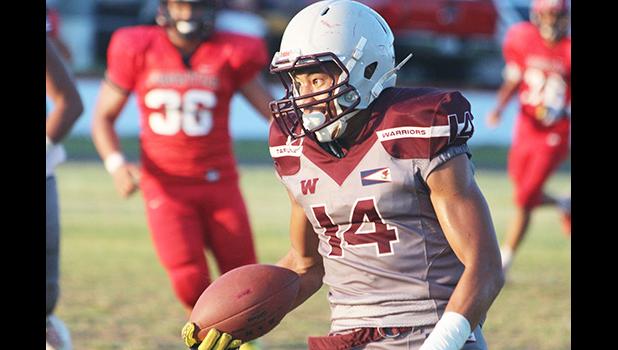 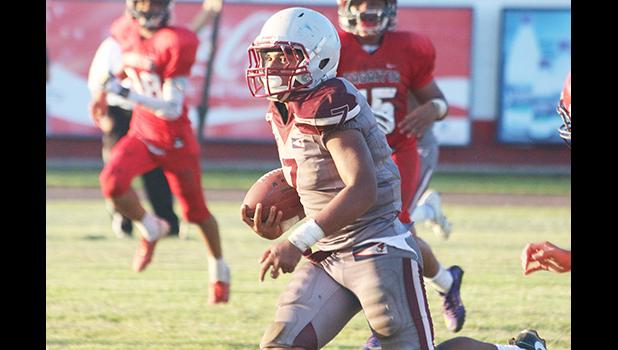 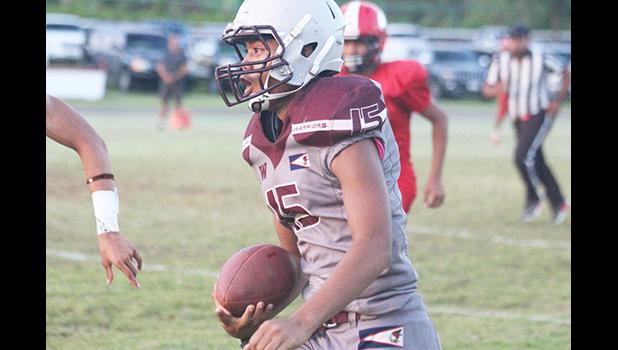 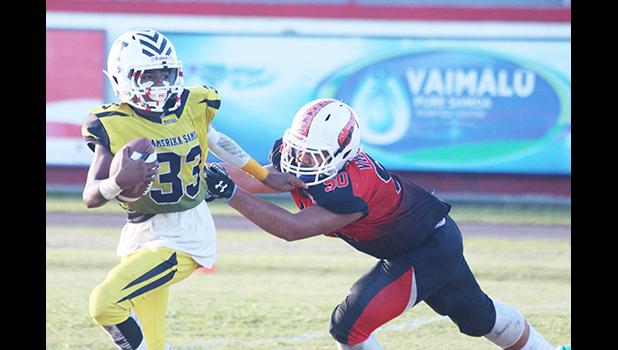 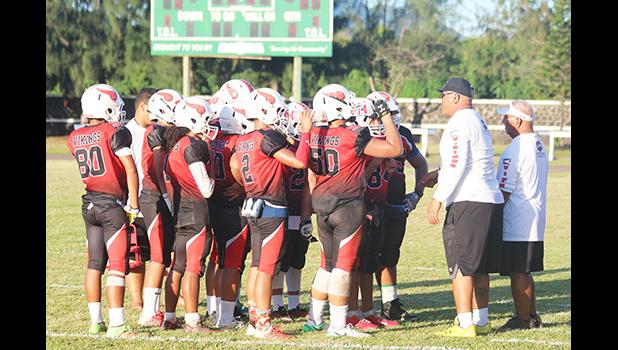 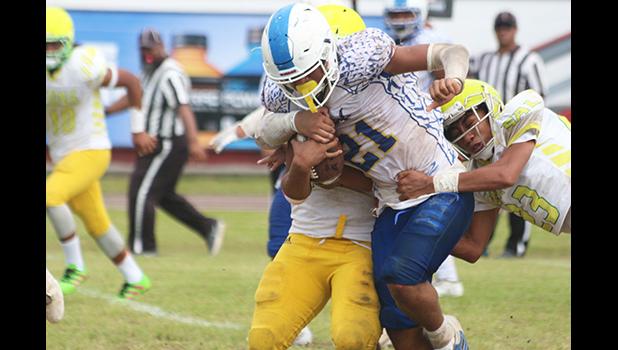 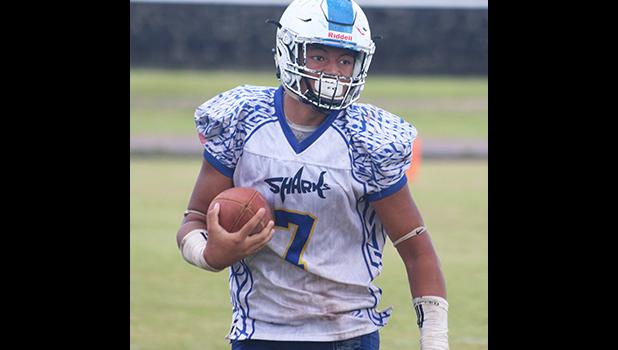 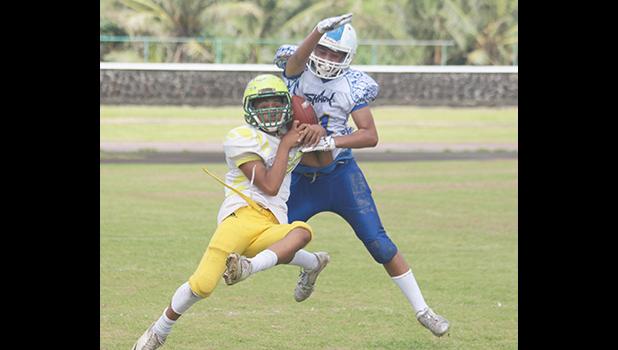 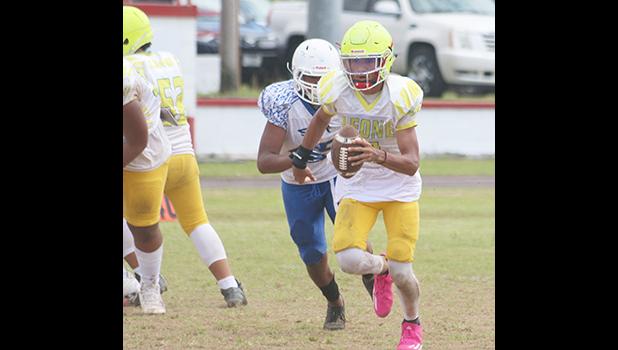 Pago Pago, AMERICAN SAMOA — Head Coach Kevin Magalei and his Tafuna Warriors remain undefeated and at the top of the Junior Varsity division as the No.1 seed, after another victorious weekend, defeating the Vikings 30-2. Meanwhile, the Samoana Sharks have climbed up to rank No.2 after defeating the Leone Lions 32-0 last Saturday morning.

Currently, Samoa News hasn’t received an official notice from ASHSAA or DOE regarding Tafuna and Leone’s JV game two weeks ago. Therefore, the Warriors still remain undefeated and unbeatable in both Varsity and Junior Varsity divisions for the current season.

Defensive Coordinator Travis Pavihi and his Warriors' defensive unit dominated against the Faga’itua Vikings last Thursday evening, as they picked apart and shut out the Vikings' offensive squad throughout the whole match.

The only points the Vikings were able to put on the board was a defensive effort that came during the final seconds of the match - a safety.

The unstoppable John Allen of Tafuna scored 3 touchdowns in the first half for the Warriors to take a 24-point lead after some assistance from quarterback Starlight Lotulelei with his two point conversions. And the Vikings just couldn’t seem to stop them.

Under a minute remaining in the second quarter, and Ieremia Ieremia of the Warriors' ‘No Fly Zone’ intercepted a pass from LJ Apisala intended for Jared Lotulelei, to spot Tafuna a first down from the 38-yard line.

From there, Tafuna’s Starlight Lotulelei dropped back to fire a long pass to Jacob Omani who hauled in the catch at the sidelines enroute to the end zone for another Tafuna touchdown with just 41 seconds remaining in the first half.

The Warriors were up 30-0 going into half time.

The second half started with the Mercy Rule being in effect, which moved the game into the fourth quarter in a blink of an eye.

It wasn’t until late in the fourth quarter, that the Vikings were able to see some light. Tafuna’s fourth and long from their own 4-yard line, and they decided to punt; but the snap to the punter went overboard, rolling into the end zone. Luckily it was picked up by a Warrior who tried to avoid a defensive touchdown for Faga’itua, but was immediately brought down inside the end zone by Elia Mata’u and a host of Vikings for a safety, sending two points to the Vikings  to end the ball game.

On the other side of the ball, Samoana’s defensive unit was on top of their game, denying the Lions any opportunities to score, shutting them out throughout the whole game as their offense did their job and took them to the promised land.

The Sharks decided to open things up with just 6:34 into the third quarter of play. Tanielu opted to go with the ‘Air Attack’. Sharks third down from the 30-yard line and Tanielu rolls out to fire a long pass to Tuala Fa’atonu for their second touchdown of the game.

Tanielu crossed the goal line with a quarterback keeper for a two-point conversion to secure a 14-0 lead.

The Lions stayed in zone coverage, and Tanielu quickly noticed and switched from the passing game to the ground attack. He opted to take the ball himself straight up the middle for a 15-yard touchdown, with just 4:32 remaining in the third quarter of play.

The two point attempt was a play action pass to Tuala Fa’atonu who was well covered by Oakland Salave’a who padded away the pass in the end zone to deny the Sharks PAT.

Late in the third quarter, Tanielu opted to tuck and run from the 5-yard line for another Blue Empire touchdown with just 1:21 remaining. Samoana was ahead by 26 points.

Leone was still unable to answer, and struggled on both sides of the ball as the Sharks put the pedal to the metal and floored it.

7:06 remaining in the ball game, and Tanielu keeps the Lions at bay with his option game. Samoana’s third down from the 48-yard line and Tanielu fakes and hand off to Samia and drops back to fire a long pass to Sefo Iosefa who hauls in the catch inside the end zone and secures another victory for the Sharks, a 32-0 win.