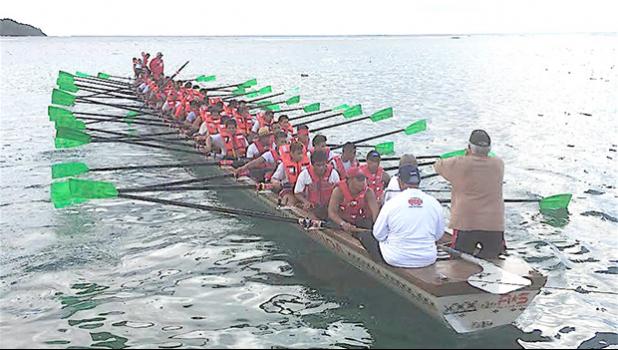 The American Samoa Flag Day fautasi competition has a first this year — it’s a new crew, an Eastside crew, joining le faigamea i le tai — and they come from Afono going to Onenoa — with the principal of Fagaitua High School Suaese “Pooch” Taase and the football team making it possible, with the help of Lt. Governor Lemanu P. Mauga and the owners of a fautasi — Sinapoia — who built it and look after it, Leotioti Maselino Ioana and Sandra Lutu, who said yes to FHS’ use of it.

“When I found out that the team wanted to use the Sinapioa boat, I thought to myself why not, this will be a great opportunity for them to use it. No one is using the Sinapioa, so of course they can use it,” Leotioti said, the builder of the Sinapioa.

The team consists mainly of the FHS Football team, with other students and some FHS teachers included.

The skipper of the boat is Taomaga Meafou Sagapolutele, who told Samoa News, “This is such a great opportunity for us because there is no boat on the east side starting from Afono going to Onenoa. So we wanted to do this to represent that side of the island. Each one of these kids are from those villages so we are representing the "itu malo Sua’ or in other words the Sua County.”

According to the principal of FHS, the team has been training for the last three weeks after school. Those who were selected to row were able to get waivers from their parents to participate.  “Even though we decided to put this in last minute, but we still wanted to make sure these kids put school first, so we only do training after school.”

Taomaga said, “I see that a lot of the teams train every mornings and evenings but for us we want the children to put school first and then come to our training. It is definitely a good sport for the boys too because now a lot is happening, kids are getting into drugs and we do not want our kids to end up into drugs.”

He added, “All of these boys are new at this so they are not as experienced like the other respective fautasi teams. Our main goal for them is to always have a good spirit to play happy, work together and be in unity with all the other teams no matter what.”

Leotioti said he will be steering the Sinapioa in this year’s race. Known for his boat building skills —  he built such fautasi as the Fuao, PaepaeUlupo’o, Sinapioa, God is Great, and Le Rina, he has been helping the team for the last three weeks, training them how to row and also advising the skipper about team unity.

“The most important thing in a race is for the captain and the rowers to work together, to be in unity. These boys have only been training for 3 weeks and they definitely now know how to row. I know once they get use to this they will be able to row for their own respective villages when they have their own boats. But the only thing I have to say to these young boys is don’t row too fast or you will have no more energy and not make it to the finish line, that is what some of the other fautasi teams failed in,” he said.

“I’m glad they have this opportunity to experience this, all thanks to Lt. Governor Lemanu for approving it, and also the help of Gaoteote because we do want all our kids of American Samoa to participate in their own respective fautasi boats to keep them occupied or else they might end up doing drugs.”

Captain Taomaga concluded, “I would like to thank the principal of Fagaitua High School — who will also be on the boat — for being a great support for the team, and also for the parents of these boys for allowing them this opportunity even though it was last minute.

“Last but not least, thank you Lt. Governor Lemanu Mauga for your support  — to give these kids the experience of a lifetime,” he said.

As one of the student-rowers, Rudy Jr. Mose, told Samoa News, “This is our first time rowing and most of us have no experienced rowing, but we are really grateful for this kind of opportunity to keep us busy and excited to be part of the race for Flag Day.”

Captain Taomaga noted, “Best of luck to all teams and may we have a safe and blessed race for this Flag Day!”