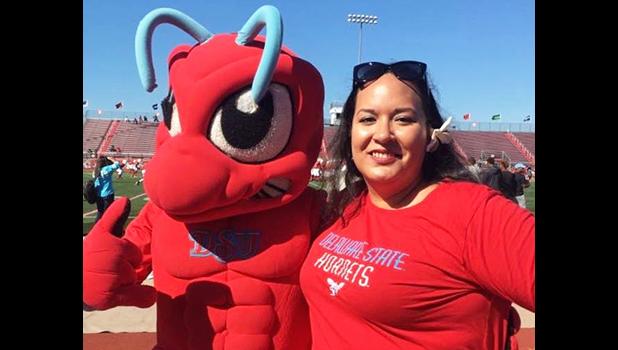 DELEWARE STATE UNIV. — After working with kids most of her adult life, Rachel Jennings of Laulii decided to try her hand at advising at the collegiate level and the decision ultimately led her to accept the position of athletic academic advisor at Delaware State University.

And because of her history working with football players, she is tasked with advising members of the Hornet football team.

Jennings was born in American Samoa but moved to Tennessee when she was only 5 years old. Growing up, she excelled academically. She was educated in Tennessee, where she graduated high school in 2003.

In 2005, her grandfather, the late Fatuletoga Dr. Philo Jennings Sr., was diagnosed with cancer.

Jennings made the decision to transfer to the American Samoa Community College and return to to the territory to help take care of her grandpa. While at ASCC, she was inducted into the PTK Honor Society.

She eventually returned to the mainland and graduated with her BA in English from Middle Tennessee State University. Afterwards, she came home and taught English at Samoana High School for eight years.

The daughter of Su’a Fatuletoga Philo & Epenesa Jennings of Lauli’i; and Teresa & John Boyer of Shelbyville, Tennessee, Jennings was an active and positive force in the lives of many local athletes. While in the territory and teaching at Sharksville, Brandon and Brian Smart of Fieldhouse 100 reached out to her and asked her to help with the academic side of their non-profit.

Fieldhouse 100 was a non-profit organization that helped local student-athletes with scholarship opportunities to attend college through sports and receive a free education.

Jennings agreed and eventually became the group's director of academics, ensuring that all student-athletes receiving scholarships met the NCAA requirements as far as grades and SAT scores. After the Smart Brothers left the island, Jennings and Keiki Misipeka formed their own non-profit, Pasefika International Sports Alliance (PISA).

(Keikiokalani “Keiki” Misipeka, was born and raised in American Samoa. His parents are the late Kelemete Misipeka of Fagatogo and Iolani Misipeka of Honolulu, Hawaii. He graduated from Samoana High School in 1998. Misipeka is believed to be the first person to have graduated from the American Samoa high school system to coach AYFS youth and high school football, then relocate to the mainland to become a junior college and Division I football coach. He currently coaches football at Delaware State).

While Misipeka was in Las Vegas, Jennings remained in American Samoa, where her two-room house became player central, with student-athletes from Faga’itua, Samoana, Tafuna, Marist, and Leone using it for tutoring and study sessions, as well as a place to get a hot meal and crash.

Despite being from rival schools, the young men who stayed at Jennings' home developed a bond that transcended school rivalries; most of the players keep in touch with one another to this day. According to Misipeka, Jennings helped with preparations for the Faa Amerika tour, through which student-athletes from American Samoa, Hawai’i, and Las Vegas were able to take part in summer camps and visit universities across the country.

“I saw, and still see these boys as my sons," Jennings said. "With their families’ blessings, I became their second family; cooking dinner, washing clothes, taking them to school, making them do feaus, but above all, tutoring and guiding them through the difficult recruiting process. I kept an open door and phone-on policy, meaning parents could come by the house at any time without telling me, and could call at anytime. This helped build the bonds of trust and respect with one another. They could see my heart was in the right place because I didn’t ask for money, I only asked for their support.”

Ms. Rachel, as she is known to those she has helped, eventually left Samoana and went to work at the DOE Testing Office. Although she could no longer tutor for the SAT, she continued with all other aspects of PISA’s goal: to send as many students as possible, off-island for schooling.

For now, Jennings and her PISA co-founder Misipeka are reunited, working hand in hand once again. This time, helping student athletes at Delaware State University, one day at a time.