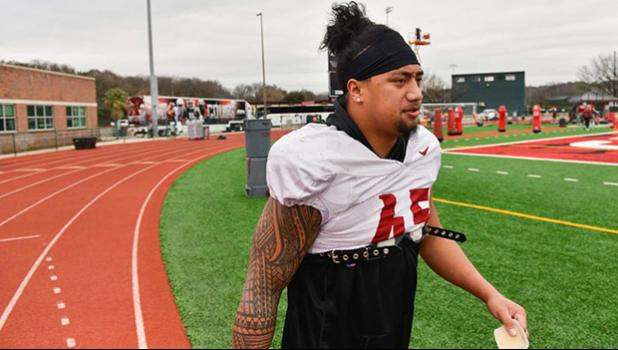 San Antonio, TEXAS — Logan Tago and teammates at Samoana High School in American Samoa gathered in a classroom or basketball gym to suit up for games. The school didn’t have a weight room or locker room, Tago said, part of the reason Division I offers were scarce.

Tago is one of a handful from the island to journey more than 5,000 miles to play at Washington State. After a career of highs and lows, Tago will play his final game with the No. 13 Cougars on Friday as he and an improved defense clash with No. 24 Iowa State in the Valero Alamo Bowl.

We don’t get that much opportunity to play in DI. I was just blessed to have a scholarship,” Tago said. “During this offseason, my teammates believed in me as a leader, so I had to step up. And this season, I did my thing and did my job. I had to be the man down on the D-line.”

Tago, a defensive end, leads Washington State with 10 tackles for loss this season.

When he arrived on campus, his professors were hopelessly unable to pronounce his 10-syllable first name, U’umaulauaganu’u. He decided to go by his middle name, Logan.

“There’s a big adjustment from Samoa to Pullman or the U.S. in general,” coach Mike Leach said. “He did a good job adjusting.”

But after appearing in 13 games as a freshman in 2015, Tago was charged with second-degree felony robbery and fourth-degree misdemeanor assault stemming from an incident in June 2016 during which he allegedly took a man’s six-pack of beer and hit him in the head. Tago accepted a plea bargain for third-degree assault in January 2017 and was sentenced to 30 days in jail, 240 hours of community service and $800 in fines.

Tago went so far beyond his community service requirement that he was presented the 2017 Fall Community Involvement Award by WSU’s Center for Civic Engagement because of the relationship he developed with a child he met as part of an after-school program.

“A lot of people doubted me after something happened to me, but I prayed to God. God helps me a lot, man,” Tago said. “No matter what ups and downs, God is always there for you. … My teammates were there for me. They stick with me. My coaches, and everybody in this program.”