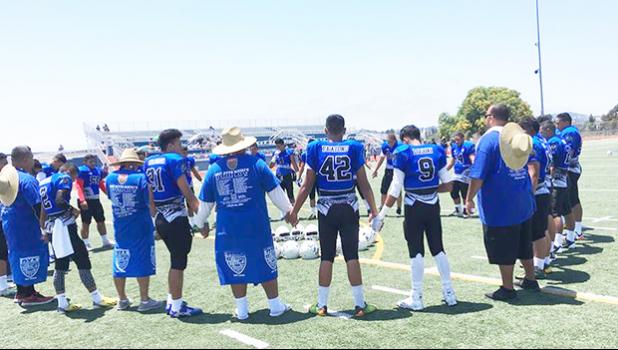 Our local team - the AYFS Matais - were scheduled to play yesterday but were declared winners by way of forfeit, after the San Diego United team failed to field a complete team of eleven players.

For now, the AYFS Matais are the top seeded team, in the 14U division, with a 2-0 record. In their first game against the Del Sol Wolverines, the Matais made it clear that they aren't messing around.

This was evident in the final score of 42-0. It was a lopsided victory that shows how well prepared and hungry our young football players are.

Samoa News has been in contact with several players on the team and their family members.

Sam Logoai, #9, expressed his gratitude to the people of American Samoa for their continued support and prayers for the team, and added that they remain humble as they move on to the next games on their schedule.

The Matais didn't play yesterday but they take the field tomorrow at Madison High School against a team yet to be determined, at 5p.m. (CA time)

In a message posted on social media, one of the AYFS coaches who is in San Diego chaperoning the Matais wrote, "We want to thank all the parents, families, and supporters of our AYFS Matais Football Team back home in American Samoa for your endless prayers and support. We are here and we will represent with our very BEST. We love you all and God bless!"

For the game that was won by forfeit, he wrote, "It is unfortunate that our boys didn't get to play as planned but we are thankful that the boys are still in high spirits. We want to thank all the families and friends that drove and came out today to support our AYFS Matais. Thank you Pastor Benson and wife Mona Mauga for attending the game and for the pizza for the boys after. Special thanks to the Tuiasosopo Family for the kind contribution and donation for our AYFS Matais on behalf of player Fululafanua Ufivelesili. Thank all our families and supporters back home in American Samoa. GO MATAIS!!!"

The team is scheduled to return to the territory next Friday, June 30