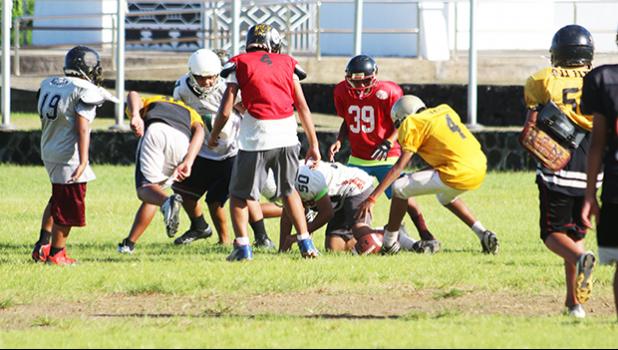 1st youth football league on island continues to grow even stronger thru the years
By
Tony Gasu
tony@samoanews.com

Seven years ago, the American Youth Football of Samoa (AYFS) program opened the opportunity on island to suit up our younger generation who were already trying out for high school football – even though they were still at the elementary level of athletics. It is now in its 8th season and continues to answer the needs of our younger football players.

Avalos said, “First and foremost I want to thank the good Lord above for basically giving us another year. We’re going to be starting our eighth season, and we will have our opening ceremony tomorrow morning at the Veterans Memorial Stadium at 8a.m. – we’ll be kicking off our opening game at 9a.m. following the opening ceremony.”

He told Samoa News that “it’s been a good year this year, we’re again able to put a league together and coordinate another football season for the kids – I want to definitely thank our helpers and our coaches, and our parents for their support along with our board.”

The AYFS president added, “It’s a team effort putting together a program for the kids here in American Samoa.”

According to Avalos, the league will be bringing out six teams again this year. “We have the AYFS 49ers, the AYFS Raiders, the AYFS Packers, which is a new team this year out of the Leone area, the AYFS Steelers, the AYFS Rams, who used to be called the AYFS Chargers, but they’ve decided to come out as the Rams this year and of course, the AYFS Bears.”

This being their 8th season of football action, the AYFS program is staying faithful to their mission and goal from the start – “all for the kids” as Avalos emphasized to Samoa News, “Our focus and goal this year is similar to last year, and that’s to sending these kids to San Diego.”

He said, “AYFS has been here for 8 years and we’ve made history – we were the first youth football league here in American Samoa,” noting they are now competing with the JPS Football League that had their debut season last year, utilizing the same age group of kids, even some of the kids that played in the AYFS league signed up and played in the JPS league, following the closing of AYFS’ 7th season.

Avalos is ever proud to be the president of the first youth football program in the territory, saying, “We were the first group to send the kids off island to Hawaii – for 4 years; and we were the first to send kids all the way to [mainland] America for this age group.”

He told Samoa News, “Our focus is to continue to teach these kids the basic fundamentals of football, we’re a foundation of the sport of football – we also emphasize the importance of education and it starts now. We’ve done it in the past and we continue to make sure that our kids are even more embedded about pushing their grades right now.”

He said, “We’ll also teach them positive things like good character and giving them a chance to make new friends and that’s basically our focus — our motto is ‘All About the Kids’, it always has been.”

According to Avalos, their 8th season will introduce cheerleading “and in order for teams to do that, they [the cheerleaders] have to go through the process as the players do – they have to sign up and register for the program. We’re trying to bring girls into this program, so we can eventually do the same for them and take them off island, because we know that they should have a chance to get a scholarship off island” too.

When asked if AYFS will again be taking another All-Star team off-island after the season, Avalos said a resounding, “Yes, we will hold our local All-Star game, the AYFS Reds versus the AYFS Blue – from there we’ll get a team together to take off island.”

He added, “Last year, we took the kids to the San Diego Gridiron Tournament, and in that tournament, there were teams from Nevada, Arizona, Texas, California, Hawai’i and of course our locals, the AYFS Matai, and we’re hoping to do that again this year.”

The AYFS president said he is proud that AYFS was able to shape the majority of the kids that are representing American Samoa in their All-Star Football Team that is currently in Hawai’i to compete in the Junior Prep Sports (JPS) Paradise Classic II. “Right now we have our high school football all-stars representing American Samoa in the JPS Paradise Classic in Hawaii and about 90 percent of those kids have already gone with us to Hawai’i before, through AYFS assistance.”

He said, “It’s a great feeling to know that those kids are out there like Juliano Falaniko, Blessman Ta’ala, Cornelius Aiava, Raemos Fano, Penei Pavihi and most of the stars on our all-star team – other kids that started this program in the first couple of years have excelled to the top, kids like Frankie Luvu and Logan Tago, who both got scholarships and are playing football at the University of Washington, and Viane Moala, who is making a name for himself at the University of Hawai’i with a football scholarship.”

Avalos concluded by thanking God for the opportunity to start the 8th season of AYFS to serve the youth of American Samoa, and said, “We definitely want to also thank the Governor and Lt. Governor – with special thanks to our sponsors, the parents, the coaches, the board and everyone who has helped make this 8th season possible.”

On behalf of AYFS organization, he invites the public to come out to their season opener tomorrow morning. He said, “Come out and witness for yourselves the talent and the hard work that these kids have put into this level of football.

“You’re welcome to come out and enjoy a full day of football at the stadium, we’ll have some good snacks over there … let’s continue to support our youth in the sport of football,” Avalos said.