Sea level rise worse in Pacific than other regions 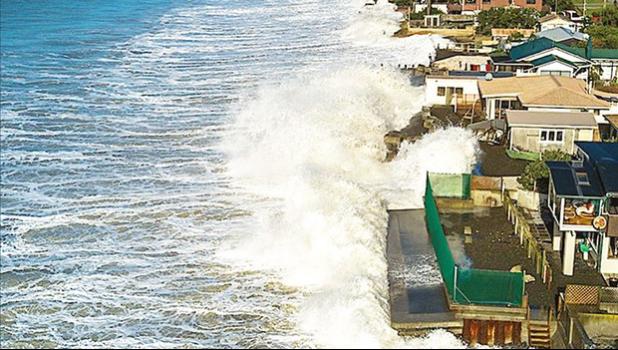 Wellington, NEW ZEALAND — The sea level is rising more in the South Pacific than in other regions, the author of a new book about the impact of climate change on coastlines says.

Neville Peat yesterday launched his book The Invading Sea which examines adaptation to the affects of climate-change in New Zealand and several Pacific Island atoll territories.

The author described the book as a call to action from governments in so-called "developed countries", including New Zealand's, on adaptation and reducing greenhouse gases.

Impacts of sea-level rise were not even around the world, with Pacific Islands experiencing among the worst effects, Mr Peat said.

His book cites Tuvaluan tide gauge measurements of sea-level rise which have averaged a rate of 3.9mm a year in recent decades - double the global average.

"You get two things happening: more energy and more likelihood of cyclones developing, and then you get the cyclones carrying this extra water vapour.

"Water vapour is itself a greenhouse gas so you get that feedback, it's compounding on already a problem issue."

Greater intensity of recent cyclones has been linked to climate change and warmer oceans.

The South Pacific is forecast to experience seven to eleven cyclones this season. Three or four of those are likely to be severe.

The region's forecasters recently released their cyclone outlook, which also said there was a 68 percent chance of the El Niño weather pattern developing.

"The island states are quite right to call on the rest of the world to help them, to help them limit the increase in global warming to a maximum of 1.5 degrees celsius (above pre-industrial levels)," Mr Peat said.

"That's not a target... Once we go over that we're getting into the two degree range and after that runaway climate change is possible."

Mr Peat said New Zealand taken a step in the right direction to offer increased funding into adaptation projects across the Pacific, but he emphasised an urgent need for this country and others to end reliance on fossil fuels.

The Invading Sea is published by Cuba Press.