Samoa PM chimes in ‘We Are One Samoa’ in defense of heavily criticized Gov. Lolo 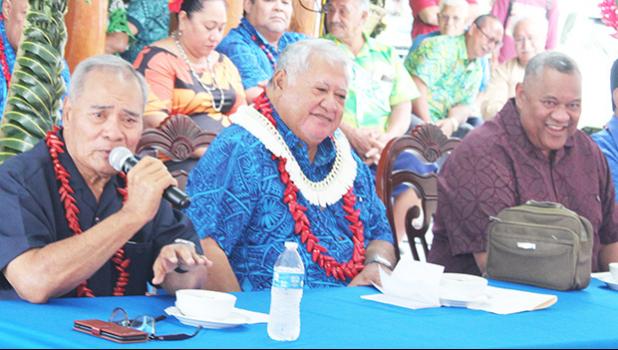 The Governor ended up at the centre of angry public reactions in the territory, for a recent donation of USD$100 thousand dollar to the Manu Samoa World Cup Campaign in Japan this year.

Governor Lolo was condemned for supporting the Manu Samoa with funds raised from a radiothon, at the expense of sporting and other social needs in American Samoa.

PM Tuilaepa, who is also the Chairman of the Samoa Rugby Union, defended the generous donation as a reflection of the two Samoas coming as one.

His defence remarks came during his weekly media conference on national radio.

Tuilaepa congratulated the mutual respect and understanding in leadership under the one united heritage of Samoans as a race of people.

“Public opinion is all part of a democratic society and people have a right to complain.

"But even if American Samoa is under a different political rule, as Samoans we are one people,” the PM offered in an attempt to promote the Manu Samoa as a team for all  Samoans.

“We are all Samoans, and it important that even if you’re in American Samoa, we are all one race of people.”

The Manu Samoa was highlighted as a team for all Samoans and Governor Lolo was praised for sharing the same leadership belief and vision in the sons of Samoa.

Tuilaepa felt it was fitting to call on the American Samoa leadership for their support before the team leaves to represent all Samoans at the world stage of rugby competition.

Tuilaepa underlined the ‘one Samoa’ unity, by recalling complaints from American Samoa at the removal of the Western tag on the independent state that made it appear to be the legitimate Samoa.

But he felt that having two Samoas, is a unique advantage of having two viewpoints for Samoans in any regional or international organizational settings.

His dream long into the future, however, is for American Samoan to one day become independent and also benefit from the same opportunities Samoa is enjoying as an independent state.