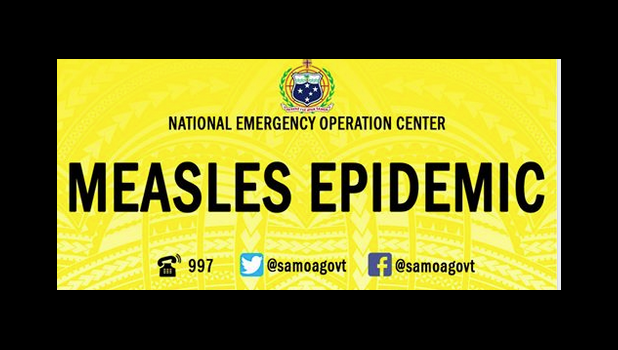 Apia, SAMOA — A Samoan anti-vaccination advocate has been granted bail with strict conditions after his first court appearance this week.

Edwin Tamasese has been charged with incitement against the government vaccination order last week after he allegedly published a post on social media against the mass vaccination drive.

He was arrested in Savaii and taken to Upolu on the weekend, where he had been kept in custody.

Judge Leota Raymond Schuster granted bail for Mr Tamasese, who was ordered not to comment, or publish or post anything on social media concerning measles, Newsline reports.

The man, who is also a faith healer, was ordered not to hand out any medication to anyone.

He will be back in court next Tuesday.

UPDATE ON THE MEASLES BREAKOUT

The Ministry of Health confirms a total of 4,819 measles cases have been reported to the Disease Surveillance Team, since the outbreak started. There were 87 recorded in the last 24 hours.

There are currently 169 measles cases who are in-patients at all health facilities. Of this, 140 are at the Tupua Tamasese Meaole Hospital (TTMH), 3 at Poutasi District Hospital, 4 at Lalomanu DH, 14 at the Leulumoega Rural District Hospital, 3 at the Malietoa Tanumafili II Hospital (MTIIH) 3 at Foailalo DH, 1 Sataua DH and 1 at Safotu District Hospital. Admissions include 21 critically ill children in ICU/HDU and 2 pregnant women at TTMH.

The total number of measles cases admitted to all hospitals recorded for the outbreak to date is 1,510. Of that, 1,271 (84%) patients have been discharged. Recovery rate remains the same since the last update.

To date, 70 measles related deaths have been recorded. There were no fatalities in the last 24 hours.

As of December 9th, 2019, approximately 91% of all eligible people in Samoa have been vaccinated against measles.

There is ongoing data entry, verification, and analyses to estimate vaccination coverage for both Upolu and Savaii by target group and region during pre-campaign and mass vaccination campaign in Samoa. An update will be provided as soon as possible.