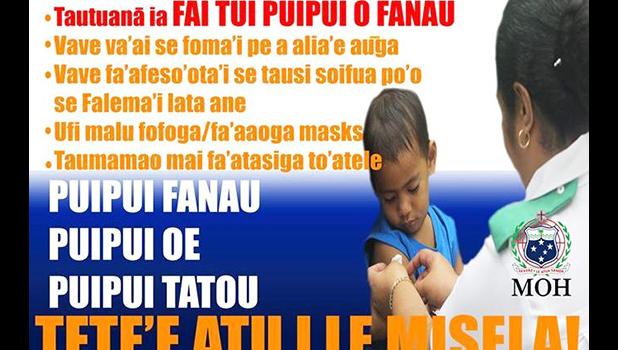 Seven cases had been confirmed, and it said the death of a one-year-old last week was also likely to be because of measles.

In a statement, Samoa's government said test results back from Australia showed two adults and five children had measles.

They have been treated and discharged.

But it also said the death of a baby last week was "highly suspected" to be because of the highly contagious virus, but tests were still being carried out.

None of them were vaccinated.

The Health Ministry said it anticipated more cases, and a measles epidemic had officially been declared in Samoa.

It urged people to get vaccinated in clinics across the country, and to avoid crowded areas.

Anyone showing symptoms is urged to seek help.

Meanwhile, a vaccinologist said it was inevitable a measles epidemic would be declared in Samoa.

Auckland University's Helen Petousis-Harris said Samoa had an immunisation rate as low as 31 percent, which might have dropped further because of a lengthy pause in the vaccination programme last year.

The measles outbreak in Auckland would have added to the country's vulnerability, Dr Petousis-Harris said.

"Our biggest outbreak has been in the South Auckland area, where we've got a lot of people from the Pacific and there's a lot of people visiting from that area, so the chances of the disease being imported into Samoa was very high."