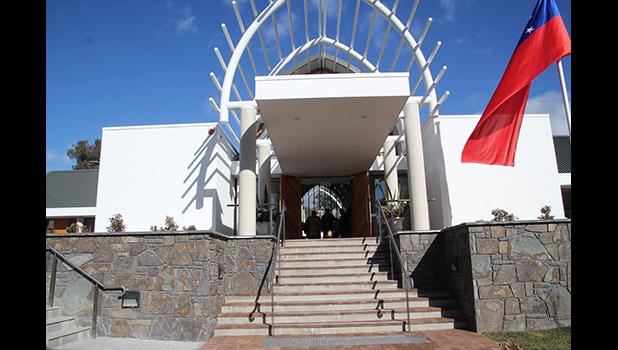 The Prime Minister of Samoa, Tuilaepa Sailele Malielegaoi, officially opened the new Samoa High Commission complex in Canberra, Australia in late July. It was a momentous occasion for the diplomatic community and the Samoans from around Australia, according to a press release from the Prime Minister’s Office. The new complex is located in Yarralumla- Canberra, which is the centre of the diplomatic community in Australia.

The complex comprises a new chancery and official residence, and was designed by Cox Architecture. The building is “an archetype” of a traditional Samoan fale in a modern setting, and incorporates elements of a typical fale, with sennit-woven motifs decorating the top of the concrete pillars in the reception foyer.

Tuilaepa paid tribute to the late Lemalu Tate Simi, former High Commissioner, who worked with the firm on the design before his untimely death in 2014. He also commended the excellent workmanship carried out by the Contractor, Manteena Construction, and thanked the present High Commissioner, Her Excellency,  Hinauri Petana, and staff, for ensuring the execution of the project was carried out within budget and on time as scheduled. The PM noted that this was a rare achievement these days.

The Hon. Senator Concetta Fierravanti-Wells, Minister for International Development and Pacific, spoke on behalf of the Australian Government congratulating Samoa, and spoke of the close partnership between Samoa and Australia, and the leadership Samoa has continued to demonstrate in its affairs and especially in the region. She reflected on the investment by Australia in the country, contributing to its economic development goals.

The keynote address was delivered by the Prime Minister, who reiterated the long standing and enduring partnership withAustralia, with this year being the 40th anniversary of diplomatic relations between the two countries. He acknowledged the great contribution by Australia to Samoa's development goals.

Tuilaepa also acknowledged the important role of the diplomatic community in Samoa’s national, regional and international goals, and emphasized strong collaboration on the priority issues of relevance to all of climate change, its impact on the environment, and the imminent danger to our oceans and marine life.

He warmly welcomed the strong presence of the Samoan community, and urged them to continue to work together with our High Commission in support of the welfare of our people in Samoa and here in Australia. He also urged them to use wisely the opportunities available in Australia for economic and social empowerment.

The Prime Minister also acknowledged the contribution by the Accident Compensation Corporation, which enabled the construction of the new chancery.