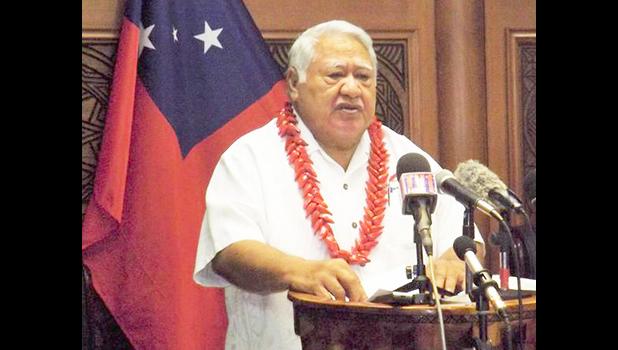 Apia, SAMOA — Samoa's government is to shut down on Thursday and Friday this week so all public sector workers can help with the country's mass measles vaccination campaign.

Prime Minister Tuila'epa Sa'ilele Maleilegaoi announced the measure on Monday evening in a nationwide address. He said all branches would close except the water and electricity authorities.

Tuila'epa reiterated the importance of the mass vaccination campaign and said there were three key facts people needed to understand.

"First, vaccination is the only cure. Two, if infected cases are presented early for treatment, full recovery should be expected. And thirdly, no traditional healers can cure measles."

Tu'ilaepa said the government closures would allow workers to help with vaccinating the remaining at-risk population who have been missed in the mass vaccination campaign.

The Ministry of Health said 58,000 people had been vaccinated to-date.

Meanwhile, there have been another five deaths in Samoa's measles epidemic, bringing the toll to 53. It's the sixth consecutive day the death toll has risen, with children under the age of four making up the vast majority of the dead.

The Ministry of Health said in the past 24 hours, there were another 198 cases of measles recorded, bringing the total to more than 3700. There are 183 people in hospital, including 19 critically ill children.

Samoa is racing to immunize its entire population and today authorities expanded the ages of those eligible for vaccinations. They're now available for those aged between six months and 60 years old.

Previously, the vaccines were being prioritised for everyone between six months and 19 years old, and non-pregnant women up to 35 years old.

"Let us work together to encourage and convince those who do not believe that vaccinations are the only answer to the epidemic," PM Tu'ilaepa said.

"Measles is not a new disease to Samoa and rarely claims lives. If a suspected case is presented early for treatment, full recovery should be expected."

Tu'ilaepa added "no traditional healers" could cure measles, and people should be wary of promises of alternative cures.

Some claim high doses of Vitamin A are an alternative to vaccination, but experts say that is not based on evidence and it cannot prevent infection.