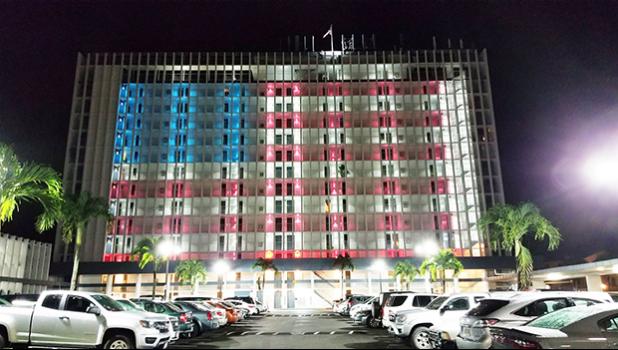 KANEOHE, OAHU (HawaiiNewsNow) - This July Fourth, lots of folks are putting out American flags to show their patriotism.

But one condo went much further.

An American flag now adorns the side of the Haiku Hale condominium in Kaneohe -- and it was created entirely from lights.

The 135-unit building is the tallest structure in the portion of Kaneohe next to Kahekili Highway. The idea to turn one side into an American flag came up just a few weeks ago among members of the condo board of directors.

"To be able to drive by and see that big old flag out there, you know, it just gives everybody a sense of pride, and you know, 'U.S.A.' That kind of thing," said board member Kate Arizo.

The last time they did this, they had to wrap incandescent light fixtures with colored cellophane.

"We actually put up a flag five about five years ago, and it took about a week to put the lights on," said board president Wayne Asam. "And this one took, if you put everything together from start to finish, it took half a day."

When the photovoltaic panels were installed at the condominium, new LED lighting for hallway areas was part of the deal. It made the transformation from everyday lighting to American flag to quick and easy one.

"If you're standing out in the street and thinking, oh my gosh that's a lot of work," said Arizo. "But it was very simple Scotch tape and cellophane.

Asam, Arizo and a third board member used a spreadsheet that mapped out where the right colors were needed. Then a small piece of the right color cellophane was taped onto the LED.

"It's spectacular, but it's really a low-tech solution to getting the system lit up," said Asam.