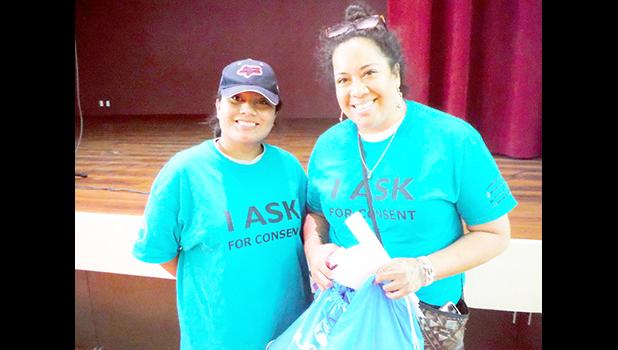 Auckland, NEW ZEALAND — During the COVID-19 pandemic, domestic violence has soared globally, and the Pacific has some of the world's highest rates of violence against women.

Five feminists from the Pacific chose to acknowledge International Women's Day this year by sharing their ideas on tackling gender-based violence and gender inequality.

The founder, Maluseu Doris Tulifau, started the initiative in the United States, while she was in college, and a few years later she decided to explore her own personal journey as a domestic violence survivor by moving to Samoa and looking into the statistics of domestic violence in her homeland.

"Samoa has data on domestic violence, but what they don't have is a solution.

"I found myself bringing my organization from the U.S to Samoa because I saw a need for it, a need for a safe space for young Samoans.

"This next generation who will be the solution to the high rates of domestic violence in the country," she said.

Maluseu said her message to address gender inequality was to make sure each generation of women kept opening doors and passing the torch for the next.

"It is very hard for us in a country that is very patriarchal, you feel like no one helps you and you don't help the next person.

"When I come into these spaces to serve, I'm reminded that I want to make sure that the doors that I open, will be easy for the next young woman to go into those doors."

Deo said sex education was not only about the physical act of sex, but learning about sexual reproductive health, rights, empathy and equality.

"When you learn about equality, your rights, what is a healthy relationship, these are the information that helps us develop empathy, dignity, integrity and autonomy around our body and our rights and that's what is a comprehensive sex education is," she explained.

Deo said research had proven that informing young people on a rights-based sex education would lead to a reduction in gender-based violence.

"If we are constantly relaying strong, powerful messages of equality between men, between women, between gender non-conforming people, if we instil values of non-stereotype gender roles and educate our kids about respecting and what consent means in relationship, we actually addressing many of the underlining inequalities that result in gender-based violence," she said.

"In terms of making a generational shift to end violence towards women and gender inequalities, to really see change in society, this is an opportunity to use the data and research and dispel misinformation that is prevalent and we need to incorporate sex education in our region," Deo said.

The government and policy-makers had a key role in making such changes, Deo said, as they were the leaders ultimately making the policies and implementing it.

"I think it's essential to include communities and young people because you need to make sure the content of information is relevant and adapted to their needs," she said.

Zutu said it was important to advise parents to get involved in their daughter's education as it would not only benefit them, but also make their families, communities and country safer and more prosperous.

"Education is important because it will give them knowledge and skills, so that when they face challenges in their work as a woman leader, they know how to deal with, address and also help the community."

Zutu said she was seeing a positive change in young girls in education in the Solomon Islands, with education data showing that there were more females registered in high school than males.

"We're starting to see an increase in women in male-dominated jobs such as engineering, electrician, IT, but we still have a lot of work to do to ensure equality in the nation," Zutu said.

Fijian Jana Ali-Traill added to the conversation, saying a lot of change would come from changes to Fiji's legislation.