Fiji's west urged to prepare for the worst as cyclone nears 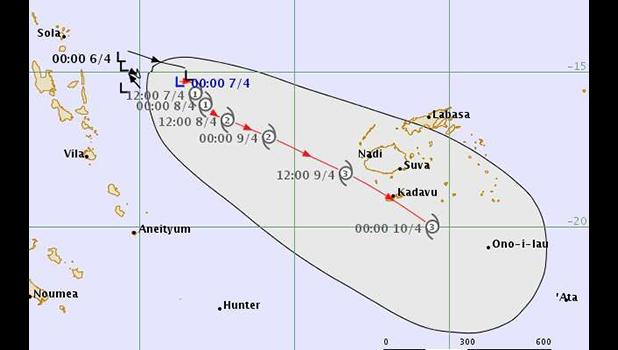 Suva, FIJI — People in Fiji's sodden west were being urged to prepare for the worst on Saturday as the country prepared to be hit by the second cyclone in a week.

A tropical depression - TD13F - continued to gather strength as it slowly moved east towards Fiji. It would likely be declared category one Cyclone Kala on Saturday night, forecasters said.

"It could be a very severe cyclone," said Ravind Kumar, the director of the Fiji Meteorological Service. "There is a very high potential for it to even develop rapidly into different categories."

"We expect that by the time it is close it will have attained a category two status, or even three."

On its current forecast, the system would develop into a cyclone on Saturday evening as it moved towards Fiji's western division, brushing close to the southwest of the country on Sunday night as a category three.

Heavy rain, widespread flooding and damaging winds were expected over the next 24 to 48 hours, Mr Kumar said.

Mathew Bolaitamana, a Red Cross official in the Western Division, where 40 percent of Fiji's population live, said another cyclone was the last thing the region needed.

Crops had been destroyed, water supplies contaminated, and hundreds of people remained in temporary shelter.

With another cyclone forecast, aid distribution had largely been halted.

On Friday night, the towns of Nadi and Ba flooded, and on Saturday morning, the police said two people were swept away by floodwaters. The body of one person was found in the afternoon, while the search continued for the other, a police spokesperson told the FBC, a state broadcaster.

Mr Bolaitamana said there was a brief lull in the weather on Saturday afternoon, which people were using to prepare.

"I believe this is the calm before the storm, as they say," he said. "But it's given the people ... enough time to prepare for the imminent arrival of Cyclone Kala."

"Fiji Police Force and the National Fire Authority are rallying those living in low-lying areas and those in flood-prone areas. Also a number of communities and villages that we feel need their support that should shelter them at the height of Tropical Cyclone Kala and also in the torrential downpour that we expect."

400 people were already in emergency shelters across the west, authorities said, and officials expected that number to swell as the evening drew near.

While it was not forecast to be a direct hit, Kala was zeroing in on a region that is still struggling a week after another cyclone. "This could well be bigger than Josie," said Mr Kumar, adding that the Meteorological Service had taken the unusual step of distributing cyclone warnings ahead of an actual cyclone forming.

"The ground is already saturated with all the rain that we've had in the last few days," he said. "Any rain that is going to come out of the system is going to go into these full drains and rivers so that's why we're keeping our communities alert."

Mr Bolaitamana said many hillsides would be unstable, and landslides were also a serious risk in the coming days.

Important phone numbers for those in Fiji:

RNZ Pacific will be broadcasting the latest cyclone warnings just before the top of the hour throughout the weekend. Find out how to listen to our shortwave service around the Pacific, including in Fiji, here.