Cool Stuff: Behind the drama of the measles epidemic 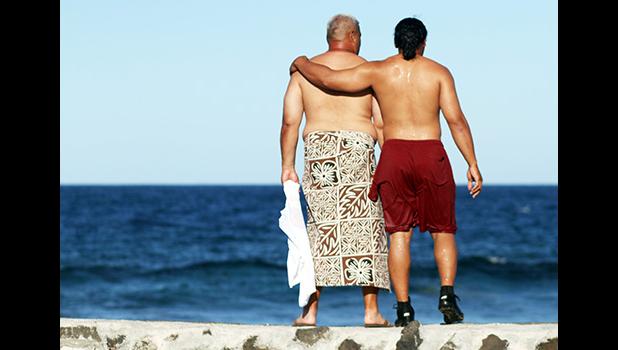 Apia, SAMOA — En route to delivering 50 Luminaid Solar Lanterns for the Fiji Red Cross, Cool Stuff got to enjoy October 26, 2019 as a normal hectic Apia Saturday. I battled the bank lines at BSP, enjoyed shopping the new fashions at Eveni Carruthers, rewarded myself with Pinati’s vaimoa, stirfry, and sosisi.

Even the driving rain was fine as it was a cool taele washing away the sweat and dust of the day.

Talofa Air delivered my luggage, me, and camera gear in their usual routine professional manner to Pago.

Halloween fun with Bluesky and GHC Reid was a treat to cover for Samoa News. As always, Jade’s Restaurant Cumin Beef was a delightful treat on completion of my Nuu’uli coverage.

Productive late October days in the Territory prevailed. Ruby Red Cafe hosted an important discussion about the potential for a Civil Drone Patrol to assist law enforcement and first responders.  It is in the hands of local American Samoa drone pilots if they wish to aid their community in an organized manner.  Cool Stuff had a mission of sharing specific info from the Deputy Director of the FAA and provide delivery hardware from a company called Zing to aid transport of small emergency supplies, i.e. water actuated life preservers, insulin, cell phones, water, strobes, etc, to victims.

Arriving back in Apia six days later, my beloved Samoa was in a panic.

A high percentage of families wore protective face masks, though bizarrely, some were smoking cigarettes through them. The pace of shopping and getting out of town was intensified by ten.

Cool Stuff left for Fiji within hours of arriving in Apia, but became haunted on the journey with the recollection of old folks who spoke in the 1970’s of the terror of the 1927 flu epidemic. A catastrophe, that surely influenced the recent decisive Samoa Government strict shutdown of the Nation.

In Suva, I reunited with old pal, All Blacks/ Manu Samoa legend Sir Michael Jones. Besides family chat, Michael and I discussed our mutual concern about the growing Samoa measles flare up.  I told him what I saw just a day before in Apia.  Sir Michael, Sonny Bill Williams and other rugby stars are currently fundraising to help the families who have lost their precious children.

Upon learning of the Territory’s new 14-day vaccination requirement when traveling through measles affected South Pacific Nations, Cool Stuff got a new MMR shot and certificate. I may be called upon to document the measles tragedy in many affected nations, including American Samoa’s recent outbreak... there are no exemptions for media... so I have proactively complied.

Cool Stuff helped prep a journalist for the 48 hour Hawaii doctors mission to Upolu. The journalist suggested Cool Stuff immediately go as their coverage was restricted only to the vaccination efforts, not the overall impact on the Nation of Samoa.

It is prudent for the Government of Samoa and the World Health Organization to facilitate widespread media coverage so that more nations and private donors will be motivated to expand their contributions.

Saturday, a Cool Stuff adult Territorial relative was denied the ability to receive an MMR vaccination.  He was informed by the ASG Dept of Health that only children will be vaccinated.

Is this due to a shortage of vaccines on hand?  I respectfully charge my fellow journalists at the Samoa News to follow up.

One of this weekend’s ASG releases alludes to possible future immunization dates, but the matter needs greater specificity and clarity to keep the Territory’s populace calm and informed.

Hawaiian Airline’s Senior Vice President, Ann Bottecelli, advised Cool Stuff that per an ASG request, a 25 pound box of measles vaccines were shipped on their November 25, 2019 flight gratis to PPG.

Hawaiian Airlines heart shows true, at a critical time as they also donated to help Hawaii doctors and nurses to Upolu last week.

Of the two Samoas, American Samoa is the sole supplier of medical grade oxygen, necessary for advanced ICU measles cases.

Cool Stuff’s sources indicated that Peter Crispin is the hero, by saving and restoring the oxygen generation facility originally based in Apia.

Troy Polamalu, family, and crew were expected to arrive in Tutuila in a matter of weeks for their continued efforts to help the Territory’s youth.  In light of Samoa and now Territorial advisement to avoid large gatherings, do you Coolio’s think its best for them to stay home and use their resources to help acquire further measles related treatment supplies and vaccines?

Both Samoa and the Territory of American Samoa are not alone in facing this cruel ordeal. The World will help as individuals, churches, companies, and nations.

In the Territory, US Coast Guard C-130’s may become your new best friend if your nine person outbreak expands.

Bless Samoa’s children, and prayers for families who have lost loved ones.

Prayers for both Samoas’ leaders to continue to serve their People with intelligent and compassionate resolve.