Why We Serve: Army Reserve brothers serving together in American Samoa 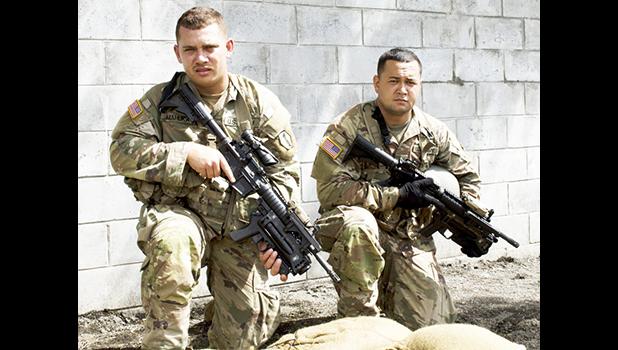 Pago Pago, AMERICAN SAMOA  — More than 200,000 Soldiers are currently serving in the U.S. Army Reserve. Out of those 200,000, there’s bound to be a few siblings serving together. However, when two brothers serve in the same Army Reserve infantry company on the small Pacific Island of American Samoa, it’s bound to turn a few heads.

Brothers Clayton (Kona) Mahuka and Pemerika Mahuka, are both proudly serving in Charlie Company, 100th Infantry Battalion, 442nd Infantry Regiment, 9th Mission Support Command, U.S. Army Reserve. The brothers say serving together makes the tough tasks a little easier to swallow knowing each other is there and they have each other’s back.

Clayton, an infantry sergeant, joined in 2011 and said he was just looking for more security in life.

“My wife was already in the Army Reserve, so I thought, why not,” said Clayton, who works for the Transportation Security Administration when he’s not wearing an Army uniform. “I wanted the security it offered, and I’ve loved it ever since.”

Pemerika, Clayton’s younger brother, an infantry specialist, joined the Army Reserve in 2014 after seeing what it did for his older brother.

Pemerika, a PE teacher in his civilian role, joined the Army Reserve for the educational benefits, but said he’s gotten so much more than that out of it.

“I’m just so proud to wear this uniform,” he added. “I think I was born to wear it. I look forward to gaining more rank and seeing how far the Army Reserve will take me.”

Though the brothers have some distant relatives who served in the Navy, they seem to be starting a new Army era and are both looking forward to a potential deployment one day. Both iterating how a deployment would test their readiness and complete the Citizen Soldier circle.

“If I do ever deploy, knowing my brother is there with me will make it much better,” said Clayton. “He’s really squared away, and I trust him. That’s one of the things I really admire about my brother. For a younger Soldier he is really good. Always on time, always tight, always ready to lend a hand and set an example for others around him.”

That praise doesn’t just come from each other, the acting first sergeant of Charlie Company, Sgt. 1st Class Kelvin Tuamasaga, also has high praise for the duo.

“I wish I had a lot more just like these two,” said Tuamasaga. “They really set the example for all the other Soldiers in the company. They’re in different platoons, but they’re still always working hard together and with everyone else. I just can’t say enough good things about them.”

Both brothers being avid fishermen, and enthusiasts of everything sea related, seem to be suited to the 77 square mile island, where they say giving back to the community is a way of life to them.

“American Samoa isn’t exactly a wealthy island,” pointed out Clayton. “So whenever we have a chance to give back to the community, that’s what we do. The Army Reserve has allowed us to do that in more ways than one.”