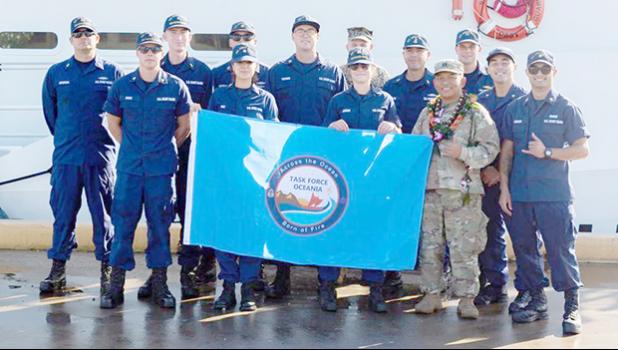 Honolulu, HAWAII — Julius Delapena spent six weeks on the open sea supporting Operation Aiga, a 46-day U.S. Coast Guard patrol that traversed nearly the entirety of the Polynesian region of the Pacific including Hawaii, Tonga and Samoa from August 17th to September 30th earlier this year. Unbeknownst to the public, a Soldier supporting sea operations is not outside the scope of what Reserve Soldiers can do. During the operation Maj. Delepena worked side-by-side with his Coast Guard counterparts to provide critically needed expertise during the operation.

Delapena is an Army Reserve nurse with the 1984th U.S. Army Hospital and the USCG mission is just one part of his individual mobilization to support U.S. Army Pacific’s Operations in the Pacific Island Countries (OPIC) (formerly known as Task Force Oceania). Delepena and his OPIC teammates are critical partners in such operations. For Delepena, it was an incredible opportunity.

“My role was to provide fulltime medical support for the mission and to function as an independent duty corpsman on the USCG Cutter Oliver Berry. Due to the distance of travel between Honolulu and American Samoa, medical support is needed on the ship in the event of any medical assistance and emergency,” said Delapena.

The U.S. Army Pacific (USARPAC) OPIC organization Delapena works for consists of Soldiers from all components of the Army, active-duty, National Guard and U.S. Army Reserve with a mission focus on the Oceania region. The diverse nature of the organization allows for unique capabilities to augment the various missions taking place in the region.

“Collaborating efforts to execute missions with our sister components allows us to identify gaps and complement each other’s needs,” explained Delapena. “The USCG needed a full time medical provider for their mission and I was able to be that provider. Also, due to COVID-19 restrictions, Samoa has closed their borders to foreign travel, if it wasn’t for the opportunity the USCG presented in this mission, we would not been able to travel Samoa. I feel that other components should be aware of each other’s capabilities so that mission critical gaps can be filled.”

Delapena’s presence on the USCG Oliver Berry was fortuitous for both the OPIC mission, as well as the health and safety of the Coast Guardsmen executing the mission.

“One of the highlights during the mission to American Samoa is that I provided acute medical care on another ship (USCG Juniper) that needed emergency care. I was transported on the Juniper to work alongside their corpsman and provide care to coast guardsmen on board. I provided 24-hour care on the ship for 2 days while in route to the closest available hospital,” said Delapena.

“Being a part of this mission was just such a unique opportunity,” said Delapena. “Being an Army nurse in the (Army Reserve), I never thought I’d be on board a ship sailing throughout the Pacific. I must admit, I’m not accustomed to sailing, but the experience was well worth the sea sickness.”