'Wise Honest' moved; As for money, it is being charged standard port fees 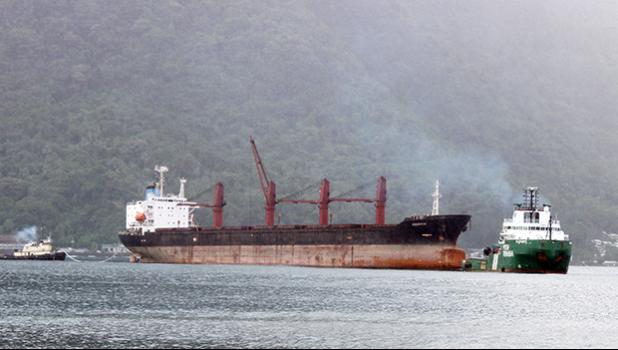 Pago Pago, AMERICAN SAMOA — Amid the rain of Tuesday afternoon, the North Korean cargo ship, Wise Honest, was towed just off the Utulei coastline, across from the ASG Tank Farm. As the ship was being towed from the main dock after 3 pm, there was quick speculation amongst locals that the vessel was leaving. But that’s not the case.

Port Administration director, Taimalelagi Dr. Claire Poumele told Samoa News that the ship was moved to “free up space” at the main dock for other vessels calling into the Port of Pago Pago, including two cargo ships arriving this week.

The Wise Honest will now anchor off Utulei — still in the Bay Area — unless there are any changes that warrant its return to the main dock, during the time the ship is in Pago Pago harbor, as the US Department of Justice continues its investigation on a matter relating to the vessel, according to federal officials.

There is no timeframe as to when the USDOJ will complete its investigation and they are partnering with the US Coast Guard and other federal entities, with the support from the local government.

Asked if Port Administration is collecting any money from the Wise Honest being here, Taimalelagi said, “we charge this ship just like we charge any vessel coming into the Port of Pago Pago”… this ship is “not exempted.”

Among the usual port charges are tonnage and tug boat services, she said, adding that Port had to “beef up operations” for this ship. For example, such a large vessel requires use of the two ASG tugboats, and Port is also utilizing the smaller ASG vessel, “Uila o le Sami”.

(Yesterday morning Samoa News observed the “Uila o le Sami” in operation around the Wise Honest, along with the two ASG tugboats.)

Taimalelagi explained that the billing for the cargo ship will be sent to the local shipping agent, contacted by the feds, which also contracted a company for security and maintenance of the vessel.

“So Port Administration is charging all of the services for the Wise Honest and the bill is transmitted to the shipping agent,” Taimalelagi said in a phone interview yesterday.

The United States in April 2018 seized the cargo ship in Indonesia because of suspicions that it was used to violate international sanctions. The ship arrived in American Samoa last Saturday.

North Korea on Tuesday this week called the seizure a “robbery” and demanded its return immediately, according to national news organizations citing a report by the Korean Central News Agency. (See Samoa News online — www.samoanews.com - yesterday for details).

The USDOJ is yet to respond to North Korea’s demand, according to several news outlets.