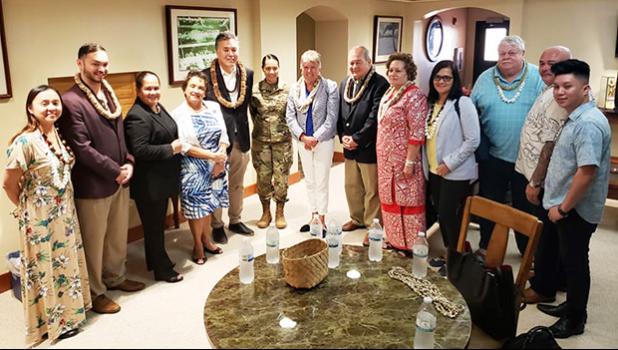 Washington, DC— Congresswoman Aumua Amata said that Chairman Mark Takano of the House Committee on Veterans’ Affairs will plan on a trip to American Samoa as soon as possible to speak to the veterans, as this week’s visit was canceled due to changes in the schedule cause by Typhoon Hagibis in the CNMI.

The Congressional Delegation (CODEL) will be able to meet with Pacific veterans in Hawaii before Members of Congress depart for Washington, D.C.

The Department of Defense (DOD) made the decision to change the flight schedule, and leave CNMI ahead of the major storm conditions, reducing planned events there. Those changes also led to canceling the planned stop in American Samoa, along with fewer events in Hawaii as well.

“Our thoughts will be with the people of CNMI as they endure the typhoon, and that’s the number one concern for everyone,” said Aumua Amata. “Chairman Takano wanted to reach American Samoa, and has told me he will plan to reschedule a listening session and veterans-related tour of American Samoa as soon as possible.”

The bipartisan CODEL was able to complete meetings with veterans in Guam and the Philippines, along with reduced schedules in CNMI and Hawaii.

“I’ve been encouraged by the time spent with other Members over the past few days, and the forums we had with veterans in the Pacific region will be valuable to our efforts to make sure these important services reach our veterans wherever they live,” continued Congresswoman Amata. “Our ongoing work includes oversight of the VA’s modernization effort, and the increase in the federal budget for veterans’ services.”

“Some of us have friends and family in CNMI, and our prayers are with all the people there,” concluded Amata. “The most important thing is their safety and recovery from Typhoon Hagibis.”