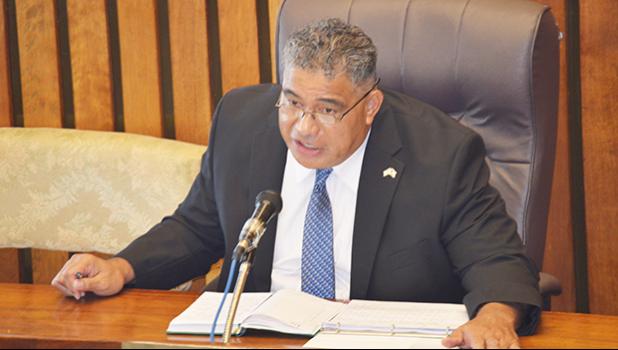 Pago Pago, AMERICAN SAMOA — The American Samoa Government was not responsible for transporting Rep. Faimealelei Anthony Fu’e Allen and his wife on the FEMA flight that arrived at the Pago Pago International Airport last Friday afternoon.

This was a decision made by the VA (Veterans Affairs) because both Faimealelei and his wife are VA patients and had been referred by the VA to Hawaii for medical care.

This was the explanation by Motusa Tuileama Nua, a member of the Coronavirus Task Force Committee during a hearing before the House Health/LBJ Committee on Tuesday this week to discuss the issue regarding a FEMA contractor who was refused entry by the Department of Health doctors at the airport.

Motusa, the Director for the Department of Public Health was accompanied by other two members of the Task Force — Faumuina J. Taufete’e, LBJ CEO and Dr. Aifili John Tufa, Health Department Epidemiologist.

The hearing was chaired by Rep. Vesi Talalelei Fautanu Jr, chairman of the House Health Committee.

Vesi pointed out in his opening statement that Gov. Lolo Matalasi Moliga has announced that our borders will continue to remain closed in an effort to protect American Samoa from the coronavirus. Vesi said that everyone must be treated the same and no one should be allowed to enter the territory until an order from the Governor says that the borders are reopened.

“It doesn’t matter who you are or what position you hold, whether you’re a veteran, a government high official, a high ranking matai in your village or whoever. The order from our government leaders is clear that our borders are closed and everyone should be treated the same and be in compliance with this order,” said Vesi, who then asked members of the Task Force Committee to update the House committee regarding this issue.

Motusa explained what happened with the FEMA staffer who had tested positive several weeks ago and was returned to Honolulu.

“There was no report from any physician in the mainland to tell us about this woman’s previous test. We only found out at the airport that the woman was tested positive last month and that’s why our staff made the decision to send her back on the flight. We didn’t want to take the risk,” said Motusa.

The three passengers aboard the plane all presented negative COVID-19 tests, which was the DOH requirement, so they were allowed to disembark and went through the processing for arrivals by DOH staff at the airport.

With regard to the other two passengers — Rep. Faimealelei and his wife who were also on the FEMA flight, Vesi wanted to know whether there was a decision by the three physicians to return the representative and his wife back to Hawaii because they were on the same flight with the FEMA contractor for over 4 hours.

Dr. Tufa explained that the representative and his wife tested negative for COVID-19 before they boarded the flight, and had never tested positive, unlike the FEMA contractor.

According to Dr. Tufa, that’s why they made the decision to allow the Rep. Faimealelei and his wife to enter American Samoa, and they are being monitored by the hospital staff.

Rep. Vaetasi Tuumolimoli Saena Moliga did not agreed with the decision to bring the faipule and his wife on the FEMA flight. He said that many of our people are stuck in Hawaii and the mainland for many months and they want to return home, however, due to the order by the Governor, no one is allowed to enter the territory.

“There are also many patients who had completed their medical checkups but are still stuck in Hawaii and the mainland. Why don’t we do the same thing to all of these patients and bring them all back home?” Vaetasi asked.

“I’m confused and mixed up on who should be brought into the territory. We don’t have a coronavirus case so far and I want to keep our shores like that. Prevention is better than cure and I salute the Task Force committee for the smart decision you made to return the FEMA contractor back to Hawaii.”

Vaetasi further stated that he’s still concerned with the fact that the representative and his wife were traveling together with this woman from FEMA who tested positive with coronavirus last month. He said that once a person tests positive for coronavirus in our territory, everyone will be easily affected.

Vaetasi fired back and told Motusa that it doesn’t matter whether a person is a VA referral patient or not. What he wants to emphasize is that we have an order from the Governor to close our borders and everyone must comply with that order.

Pago Pago Representative, Vesiai Poyer Samuelu voiced the same concern he raised in the House chamber this week regarding the use of the Tradewinds Hotel as one of the facilities to quarantine people while members of the public along with the hotel employees are also in the same area.

He said that if someone is infected with the virus, many people in the community will easily be affected.

Motusa acknowledged Vesiai’s concern and said that the Task Force is doing its best to make sure anyone who is quarantined at certain facilities will not expose members of the public.

According to Motusa, 1,267 COVID-19 tests have already been administered to people in American Samoa and all tests turned out negative for coronavirus.