Utu’s mantra was that of a problem solver, says Port director 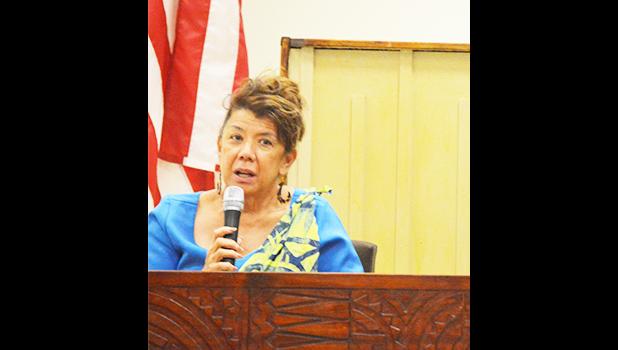 She revealed two on-hold projects, which were Utu’s ideas, that are in the planning stages, with the hope of making them a reality in the near future.

Utu’s passing is being felt by those who knew him and worked with him, during his time at the Commonwealth of the Northern Mariana Islands (CNMI), whose governor has offered condolences to Utu’s family.

Utu passed away the morning of Oct. 2nd at LBJ Medical Center from an undisclosed illness. He was in Washington state seeking medical treatment and during that time, he and Taimalelagi — both have known each other more than three decades and worked closely on many ASG committees — had communicated via email.

Utu returned to the territory last Thursday evening, and Taimalelagi was at the airport. “I got to hug and welcome him back home. I was blessed to have known Utu for over thirty years,” said Taimalelagi responding to Samoa News questions on Tuesday.

“It was always a stimulating and a learning experience to serve with Utu on boards and task force committees,” she noted. “Utu being a former Port Director was always challenging us to improve the services at the seaport and airport.”

“Air and ocean transportation to Manu'a was a high priority for Utu, who is going to be remembered for so many noteworthy characteristics and attributes,” she said.

“ASPA may have revolving challenges, but there will be Utu's TEAM well prepared to tackle and resolve the issues. That will be Utu's LEGACY. He cultivated a great team at ASPA ."

Taimalelagi also revealed that there are “two on-hold projects — Utu’s ideas — that are still in the planning stages and we hope to make it a reality.”

The first project is a walk path from the Pala Lagoon outside of the "airport perimeter fence" to the blow holes at Fogagogo. “It is going to be a beautiful walkway for people to enjoy a breathtaking view while strengthening their heart and leg muscles,” said Taimalelagi.

The second project which Utu initiated and “a few of us” — Isabel Hudson, John Utu, Lavata'i Ryan, Rotary Club and Taimalelagi —  will need to follow through is the “mini park" for children in the area below the Tafuna High School campus, adjacent to the airport - the old taxi stand area, she explained.

“ASPA cleared the area three years ago and has been maintaining it for the mini park,” said Taimalelagi, adding that, “One of my messages to Utu states, ‘I miss you not being here to ADVANCE our projects’. Utu's life was an exciting and learning journey and I was blessed to know him.”

CNMI Gov. Ralph D.L.G Torres is quoted by the newspaper saying that Utu was “a critical component and partner” of the CUC.

Torres added, “He was a friend to the CNMI and definitely a personal friend to me. On behalf of the people of the CNMI, our condolences go out to his family in American Samoa,” according to the Mariana Variety.