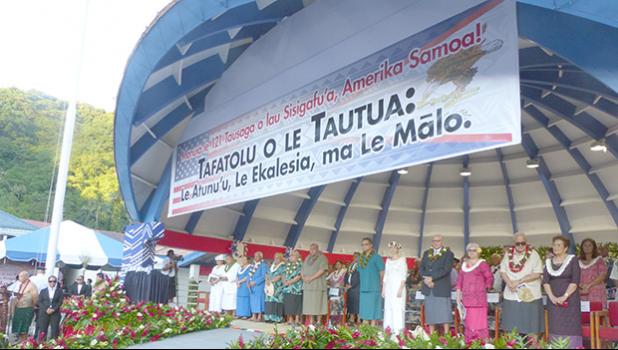 This year marks the 121st year since the United States Flag was raised on Sogelau Hill in Fagaotogo on April 17, 1900 on Tutuila island.

At the scheduled time, the governor arrived at 7a.m followed by the start of the program with Tauese Va’aomala Sunia, the new deputy secretary of Samoan Affairs, as the master of ceremonies, delivering traditional welcoming Samoan salutation remarks.

CCCAS Petesa Uta Youth Marching Band, debuting the governor’s initiative to revive the marching band program in the community, played the United State of America and American Samoa national anthems and flags were hoisted by police officers from the Department of Public Safety.

In his Flag Day address delivered in Samoan, the governor welcomed home the more than 200 passengers who arrived last Thursday afternoon on the third repatriation flight from Honolulu, saying that the government will continue the repatriation program until all local residents stranded in the U.S are returned home and reunited with their families.

He said the COVID-19 Task Force is working on the next repatriation flight next month and expressed appreciation to all those who played a role in these flights including the ASG team in Honolulu.

To the community, Lemanu said the government is working on protective measures to ensure the territory’s safety from this deadly pandemic and there is a need to continue working together, to protect everyone including children.

He pointed out that children under 16 years old don’t qualify for COVID-19 vaccination and that means, the older population must protect children from being infected with the coronavirus. He called on all residents to come together to support the vaccination drive so that children are protected.

Lemanu also spoke about the current climate, saying it’s the season of abundance of blessings which is good but being careless of such blessings could mean problems. He called on the community to work and save during good times, for the future when there are challenges and difficulties.

He said StarKist is facing difficulties due to the shortage of workers, as the abundance of financial blessings are in the hands of the community, with people not going to work. And this has caused a shortage of workers at StarKist Samoa cannery, which is looking for workers.

Due to the shortage of workers, StarKist is not meeting production goals, with the cannery unable to ship out the usual amount of export and it’s affecting demand, he pointed out.

To meet the demand, the governor claims that StarKist has transferred some of the production to other countries.

The governor said any impact on StarKist Samoa would also affect the local economy and this affects the government and the community.

The governor also spoke about the revival of marching bands in schools and churches, and that the CCCAS Petesa Uta Youth Marching Band is launching this initiative.

By 8a.m the program ceremony was coming to a close, after the governor’s address.

The Rev. Feagaiga Tautua Fuiava of the CCCAS Sailele delivered the invocation and benediction while hymns were sung by the Nua and Seetaga CCCAS Choir.

Following the Fagatogo ceremony, VIPs and guests went to the DDW Restaurant for breakfast before heading to Veterans Memorial  Stadium for the Family Day and International Farm Fair. The public was invited to go straight to the stadium after the flag raising ceremony.