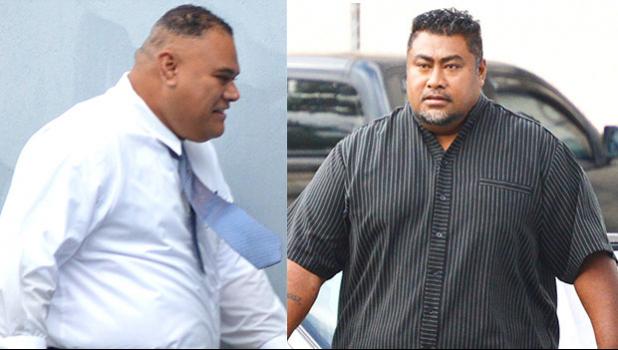 Pago Pago, AMERICAN SAMOA — Two DPS police officers who were assigned to the Territorial Correctional Facility (TCF) have been arrested and are now charged in connection with the shooting that occurred in Leone two weeks ago involving an inmate who allegedly escaped from confinement, which resulted in a male being hospitalized for gunshot wounds above his right knee and in the left hip.

Koonwaiyou was served with the copy of the arrest warrant on Tuesday afternoon, afterwhich he was booked and confined at TCF to await his initial appearance yesterday morning, whereas Lomu was ordered to turn himself in at court yesterday.

Lomu and Koonwaiyou were two of the 5 police officers assigned to the TCF who were suspended with pay for a period of 30 days, while police officers were conducting their investigation regarding the shooting in Leone allegedly involving an inmate from TCF.

If they post their bonds, the court ordered that they both remain law abiding, not leave or attempt to leave the territory, and they have to surrender their travel documents to the government’s attorney. They also are ordered not to make any direct or indirect contact with all the government’s witnesses.

The government claims that it was around 4:40a.m. on Aug. 12, 2018 when DPS police Lt. Kolia Solaita contacted the lead investigator in this case, Det. Justin Thomsen, to inform him about a shooting in Leone and that the primary suspect was allegedly a TCF inmate. The suspect was later allegedly identified by two eye-witnesses as Manu Lefatia. According to the affidavit, the shooting in Leone  allegedly occurred around 3a.m. on the same morning of Aug. 12.

Around 3:30a.m. immediately after the shooting, the affidavit states that Chief of Police Foifua called TCF and informed them about the shooting, stating that two eye witnesses were naming inmate Lefatia as the suspect. Foifua then requested a check on Lefatia’s cell.

On 8a.m. on the same morning, investigators were able to interview another TCF officer by the name of Carter Soliai at the Tafuna Police Station. Soliai stated that contrary to statements made by Lomu when Lefatia’s cell was checked at around 3:30a.m. Lefatia was not inside his cell, but he was later found around 3:45a.m. outside of his cell near inmate Isumu’s cell.

The affidavit says Officer Soliai told investigators Koonwaiyou and another TCF officer Junior Kuka, re-secured Lefatia back inside his cell. Soliai also told investigator that aside from the initial count conducted at around 11p.m. on Aug. 11, no other head count was done until they were instructed to at the request of Foifua at around 3:30a.m.

Soliai told investigators that Koonwaiyou and Kuka instructed him to state that Lefatia was in his cell the entire time and to state that they had done a secondary head count between 11p.m. on Aug. 11 and 3a.m. on Aug. 12.

Soliai asked them “why?” and Koonwaiyou and Kuka allegedly stated that they should “cover their ass.” Soliai also stated that there were holes in the fence by the Bravo Unit that led outside into the compound Lot to the south of TCF, and due to the time nearing that they had to release inmates into the common areas of TCF that he took it upon himself to mend the one hole in the fence that he was aware of. Soliai said that Lomu later approached him to reinforce the idea of “stick to the same story.”

It was discovered during the interview with Kuka that the initial call from Police Chief Foifua allegedly reported that Lefatia had been spotted in Leone at around 3:30a.m.

Kuka had been asleep after watching a movie with another TCF officer, Vitolio and a trustee identified as “Chico”. Kuka told investigators that he was awakened by Lomu to check the Bravo Unit. A check was conducted of Lefatia’s cell, by three TCF officers, Kuka, Koonwaiyou and Soliai and they allegedly found Lefatia was not present.

Kuka told investigators that while checking around the compound in the Alpha Unit, his supervisor, Koonwaiyou received a call from Lomu, their Watch Commander to stop their check of Alpha Uni and to return to Bravo Unit to check for Lefatia again. Kuka stated that when they arrived, they found Lefatia doing something inside the cell of another inmate by the name of Isumu. They then returned Lefatia to his cell.

After several police officers from the Patrol Division arrived to see if the witness (Sopi) could identify the shooter, Lomu called a meeting in the main office of TCF and instructed all officers of the watch to “stick to the one story,” stating that the excuse for the delayed report to Chief Foifua about Lefatia’s whereabouts was due to them beginning their headcount from the furthest unit (Alpha).

Lomu also instructed them to state that another head count had taken place and Lefatia was present at the time.

Kuka also told investigators that as they were trying to fix the holes in the fence with Koonwaiyou, Lomu called Koonwaiyou instructed them to go to Lefatia’s cell and inform Lefatia that officers were on their way to get him. After informing Lefatia about the incoming officers, a cellmate of Lefatia’s identified as Fagava’a handed over four cell phones.

Kuka told investigators the two phones that he had were thrown over the Bravo Unit fence to a trustee identified as “Rudolph”. Kuka stated that he did not know what happened to the other two phones that were in Koonwaiyou’s possession.

Lomu was first interviewed by investigators around 4:20p.m. on the same date as the incident. Lomu verbally stated to investigators that officers in his watch were trying to set him up and that the allegations being made against him were false. Lomu agreed to make a formal written statement regarding the incident, but then fled the Tafuna Police Substation without informing anyone and without leaving a written statement.

On Aug. 22 around 9:42a.m, Lomu was interviewed again by investigators. He stated that he instructed Koonwaiyou and Kuka to check for Lefatia after receiving a call from Chief Foifua. He also stated that he found Soliai sleeping in the visiting area, where he woke him up and instructed him to assist Kuka and Koonwaiyou.

Lomu told investigators that Koonwaiyou and Kuka came to the front office and briefed him about the situation. They informed him that when they checked Lefatia’s cell, Lefatia was inside of it watching a laptop with his headphones on.

During the first interview with investigator, Koonwaiyou provided a written statement in regards to what happened. He also made mention of an agreement to “stick to the same story” but officially cooperated saying that no checks of Lefatia’s cell had been made since about 11p.m. on Aug. 11. He also stated that when they checked Lefatia’s cell around 3:30a.m., Lefatia was not inside his cell. Later on that morning, they spotted Lefatia inside inmate Isumu’s cell.

After being informed of his constitutional rights, Koonwaiyou refused to sign the warning of rights along with the waiver and did not wish to make any more statements regarding the incident in question.

Another TCF officer was also interviewed by the investigator. Officer Vitolio, who was responsible for keeping the log for the night/morning of the incident) provided a statement to police regarding this incident. She stated that she only logs down transmissions from her co-workers who were the ones physically checking the inmates cells.

Investigators interviewed some of the inmates whose names were mentioned during interviews between investigators and TCF police officers.

Inmate Rudolph told investigators that he knew nothing of the matter. Another inmate by the name of Isumu was interviewed and stated that he did not recall ever seeing Lefatia on the night/morning in question.

Another inmate by the name of Vaa Ah Chong was interviewed and stated to police that he slept from 12midnight until 6a.m on Aug. 12.

Another inmate by the name of Lafaele Sefo was also interviewed. Sefo used to reside with Lefatia at the Aute Sports Bar. He told police that Lefatia was in his cell the entire time. He further told police that even when he was sleeping, he knew Lefatia was still there.