Two director-nominees passed by the House, DMWR nominee denied in the House 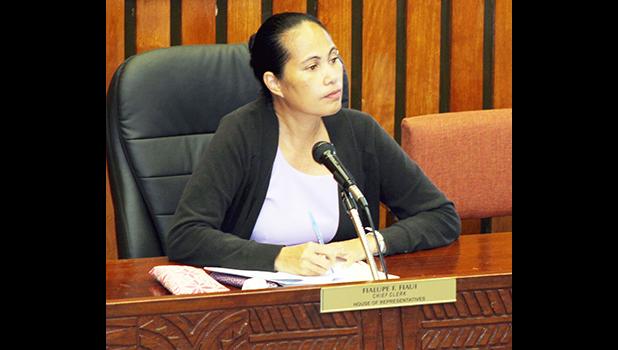 Last Friday, the House of Representatives passed two director nominees, whose Senate confirmation hearings are now being scheduled sometime soon, while denying another.

Appointed director for the Department of Public Works, Faleosina Voigt was highly praised by the House of Representatives for her service and qualifications, and also for her “beautiful” voice when she sang the National Anthem.  Chaired by Tualauta faipule, Vui Florence Vaili Saulo, Voigt was approved in the House with a vote of 17- 1.

During the hearing, Vice Speaker, Fetu Fetui Jr. urged the nominee to look into the use of the Dial-a-Ride program that is overseen by DPW, noting that the driver(s) “not all drivers” but some are abusing the program.

Voigt explained that the Dial-a-Ride program services are from Monday to Saturday. The federally funded program has grown to serve close to 400 local residents, including individuals with disabilities and the elderly population. The Dial-A-Ride program has a fleet of four vans and three buses. The services are for those 60+ years old, an includesvindividuals with disabilities.

The Vice Speaker commended Voigt for her 26 years with the Department saying that she’s more than qualified and he also commended her for having a supportive staff and deputy directors who are there to help ease her workload.

He then requested for Voigt to have the brand new backhoe and truck that was sent to Manu’a returned to Manu’a. Voigt explained that they have both been returned to Tutuila, as one is out of commission but the department is looking at sending others.

Tualauta faipule, Sam Ioka Ale Meleisea questioned Voigt on their plans to fix the drainage in Happy Valley, in front of Cost-U-Less and the Mormon lake, as it clogs up during heavy rain days. The nominee said they are using the vacuum truck to clean the drains. She said that they are also looking at permanent solution for the Happy Valley road and Mormon lake.

The condition of secondary roads in Tualauta District was raised by Manu’a faipule, Vesi Talalelei Fautanu Jr, who told Voigt that 65% of Tualauta residents are from Manu’a. He said their biggest complaint is the horrible condition of these roads and urged her to look into funds for permanent solutions for these roads. Voigt explained that it’s within the department’s five-year plan for the current fiscal year.

The nominee for Director of Marine and Wildlife Resources Vaamua Henry Sesepasara did not pass confirmation before the House, in a 10- 7 vote, with one vote set aside, as it was unclear whether it was a yes or a no vote.

However, Pago Pago faipule Veevalu Lauoi Mageo during the session motioned the lawmakers for reconsideration to keep Vaamua’s nomination alive, which was approved by all the lawmakers.

The House of Representatives also confirmed the director of Parks and Recreation nominee, Tamaaiga Pili Gaoteote, in a 15-3 vote.