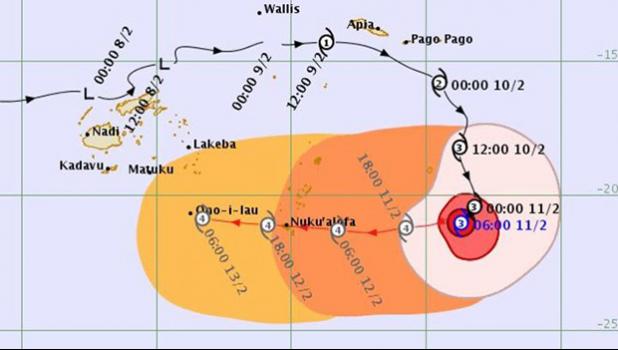 Tropical Cyclone Gita, which has already wrought significant damage in both Samoa and American Samoa, is now heading towards Tonga and then southern Fiji.

Tonga authorities have advised people to secure their property, move away from low-lying areas and to listen to the radio for information.

But Tongans are handicapped in their preparations for the storm as strict sabbatical laws prevent Sunday trading for emergency supplies according to Matangi Tonga online.

Pacific Timber and Hardware, Nuku'alofa opened up today temporarily for people to get emergency supplies but local authorities stopped the hardware store from operating.

An angry customer said he drove in from out of the capital to buy kerosene and other essential supplies but won't be able to get anything today.

Tonga Met officers said this afternoon that if the cyclone speeds up from its present slow moving approach it might arrive earlier.

The Fiji Met service is issuing special weather bulletins on Gita for the Ono-I-Lau group.

Niue was spared the full force of Tropical Cyclone Gita overnight but the category three cyclone is heading towards Tonga and picking up strength.

The acting chief meteorologist at Tonga Met service, Gary Vite, said category three Gita could become a four by the time it reached the kingdom.

"And the possibility is very high to intensify along the way up to our area, so we expect up to category four but we still monitoring the movement and strength."

The Met Service said close to its centre, the cyclone was expected to have average winds of 129 kph, possibly increasing to 148 kph.

Cyclone Gita is moving south about 22 kph and expected to gradually turn and move southwest today.

The Red Cross in Tonga is advising the public to be prepared as Cyclone Gita approaches.