Territory's Flag Day celebration of commitment to US is unique 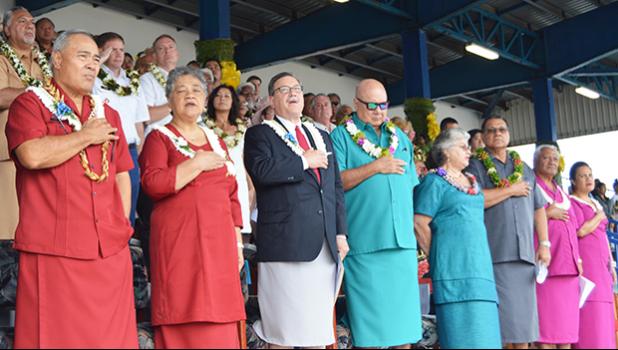 Pago Pago, AMERICAN SAMOA — In his keynote Flag Day address, U.S. Interior Assistant Secretary for Insular and International Affairs, Doug Domenech said he is committed to serving not only the people of American Samoa, but all citizens in US insular areas.

Speaking at the Veterans Memorial Stadium yesterday for the Flag Day ceremony, Domenech expressed appreciation for the honor and invitation to join in the “118th celebration of the raising of the American flag in American Samoa because we are all part of the American family.”

He brought greetings to American Samoa from U.S President Donald Trump and US Secretary of Interior Ryan Zinke — both of who relay their “appreciation to you, people and government of American Samoa, for your continued support and commitment to the country we all love.”

They also extended “their heartfelt good wishes for a successful and wonderful celebration as we all honor and reflect upon what the American flag stands for — ‘upon the Republic for which it stands, one nation under God, indivisible with liberty and justice for all’,” he said to a round of applause from the crowd.

He then noted that he was “fully committed to serving not only the people of American Samoa but all citizens in the Insular areas,” adding that his staff — which includes “your very own” Nikolao Pula, director of the OIA Office of Insular Affairs, who traveled with Domenech here, and DOI’s local field representative Lydia Faleafine.

Domenech said perhaps the most difficult challenge the territories face has been the recent natural disasters that devastated “our fellow citizens in the US Virgin Islands, Puerto Rico — where my family is from — and most recently” Tropical Storm Gita in American Samoa, he said.

“What impresses me most is your resiliency and the strength of the people in these areas,” he told the crowd. “While the federal government can be here to assist I believe it is your strong and vibrant island customs and traditions that give you the capacity to rebuild your lives quickly and thrive, despite these challenges.”

“You look after each other and this is who we are, as Americans, we look out for each other,” he continued, adding that this is evident “by your own response and recovery efforts” after Gita, and the strong partnership between FEMA and ASG that has been forged since the storm.

Domenech then said, “I do not know of any other state or territory that pays tribute to the United States flag and the principles for which it stands in this manner.” This also resulted in applause from the crowd.

“Through this partnership, many of your sons and daughters have strengthened our American family by serving in our Armed Forces,” he said, and noted that his father was a career Army officer, his son-in-law just retired from the Army and his son is an active duty captain in the Army.

Domenech extended his “personal gratitude to the distinguished American Samoans who have upheld our nation’s cause throughout all military conflicts, including those that confront us today, as the civilized world rages its continuing war against terrorism.”

On behalf of Trump and Zinke, he said, “I salute your valiant service.”

In closing, he said, “We at the Department of Interior value deeply the relationships and friendships that we have shared with the leaders and people of American Samoa over the decades.”

He noted that he had the opportunity to meet with local leaders, tour the islands, “partake of your delicious food”, share in the activities and events of this past week “and experience first hand the amazing hospitality and generosity of your people.”

“This only reinforces my commitment to strengthen our relationships and friendships and to do all that I can to support the economic and social growth of American Samoa,” Domenech said.

He concluded with the Samoan phrase, “Soifua ma ia Manuia”.

In his special remarks, Gov. Lolo Matalasi Moliga said Flag Day “celebration is also an expression of our heartfelt and overwhelming gratitude to the United States of America for remaining faithful to its commitment to improving the lives of our people.”

He extended appreciation to VIPs and others from off island attending the celebration, including Domenech, and Samoa’s Head of State, Tuimaleali’ifano Va’aletoa Sualauvi II.

To Domenech, Lolo said, “your presence speaks volumes of your commitment and that of the Trump Administration, ensuring that the needs of the people of American Samoa are properly met.”

The governor then publicly thanked Trump “for his rapid response to my request to declare American Samoa a major disaster area” in February following Tropical Storm Gita.

He said Trump’s declaration opened “the flood gate for federal assistance which is helping our people rebuild their homes and restore their sense of security.”

This year’s Flag Day theme is: The Youth for Tomorrow. “The world is changing, very, very rapidly and we must prepare our youth accordingly, so they can effectively negotiate the many challenges of this changing world,” he said.

Rev. Leitualasa Malieitulua of CCCAS Nu’uuli delivered the opening prayer and offered words pertaining to today’s youth, saying, “We have our own issues, we have our own drama that we need to address and fix.

“Too many youth today have lost their way, they fall into the temptation of the world. That’s our problem, not just the government's problem… a problem that all levels of society need to address and need to work together to deal with,” he said.

“This is our opportunity to live out our faith,” he continued. “This is our opportunity to show our children, what living out our faith means so that one day when they rise up to the roles of leadership within our government, the villages, the families and the churches, their shoulders will not be burdened, trying to carry the weight of our failures.”

He concluded, “live out our faith and honesty and transparency before God so that one day our children will be able to stand upon our shoulders as they navigate the future of their children, with Jesus at the wheel.”