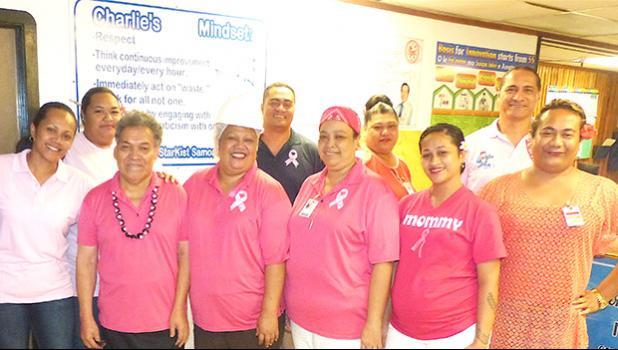 Responding to Samoa News inquiries Taotasi explained over the weekend that StarKist Samoa employees were asked to wear something pink.  StarKist Samoa, the largest private employer in the territory, has a workforce of more than 2,200.

“The response from employees was resounding, as more than 95% of employees were in pink,” he said.  This is a great sign of solidarity,” Taotasi points out. “We encourage all employees to get screened for cancer as early detection really does save lives.”

He explained that in American Samoa, one of the leading causes of death is cancer. “About one-third of cancers could be prevented from advancing if they were screened and caught in an early stage,” he said.

“Starkist Samoa Management thanked all employees for their participation in this awareness exercise and continue to encourage them to get screened for cancer,” he said.

Taotasi said that this is the third year that Starkist Samoa has worn pink during the month of October to remember Breast Cancer Awareness Month.