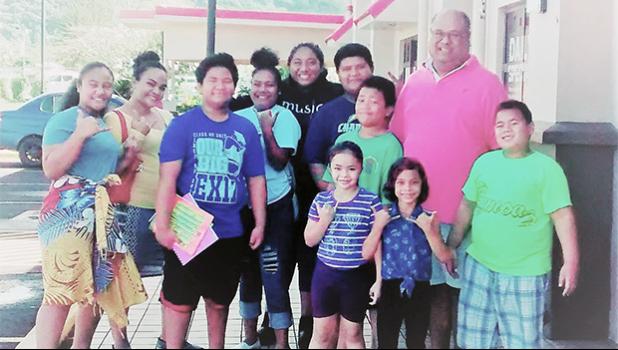 Besides usual summer camp activities such as fishing or hiking, about 20 students spent six weeks analyzing plot, character, theme, and setting of Twinderella, a musical based on a book by Charlie Lovett and set to lyrics and music by Bill Francouer.

The program started in June 12, and ended on Monday, July 24th.  Silipas Playhouse, a children's theatre is another entity of Dancing Fingers Learning Center (DFLC) at Tafuna Industrial Park.

During its last Christmas concert, Poe Mageo, DFLC founder and director, announced the launching of a children's theatre, a place where young children and teens could hang out and have fun at the same time.

“My heart breaks when I witnessed young people's lives being robbed by idleness and drugs…I figure I need to do something to reclaim their self-esteem,” lamented Mageo. Thus, before school got out in June, auditions were announced for those who wanted to try out.

Students, who range from ages 6 to 18, signed-up for the 2-day auditions; however, a handful were able to stay on until the end of the six-long weeks of script reading and acting.

As a professional reading specialist, Mageo took the script and used it to teach basic reading skills and literary elements.

“Communication is a basic skill that needs to be developed at an early age,” said Mageo.  “Drama becomes the vehicle for students to engage in a meaningful conversation while appreciating its artistic interpretation.”

Newcomers such as Hanahira Sene, Ida DeWees, Daniel Olo, Macayla Mataese, and Donovan, as well as sisters Fagamalama and Selesa Uiagalelei, have all been assigned major roles in the musical.

The students also got of few acting techniques from Asolelei and Fiona Collins of Samoa.  The two are professional playwrights, producers, and actors. They met up with Mageo when they were on island to premier “Alofa”, a play written and directed by Collins herself.

(As a performing arts advocate, Mageo was one of the few sponsors for the play.)

The entire cast of Twindearella is now taking a break. They will return to the center on the third week of August to resume rehearsals. If all goes well, Twinderella, would be staged in October after White Sunday. About the same time in August, the center opens for the fall 2017 semester for pre-registered students only.

DFLC holds two public annual concerts, and has done so since it re-opened last year. And, with the opening of the Silipas Playhouse, the community will sure appreciate another level of live entertainment from its talented local students.