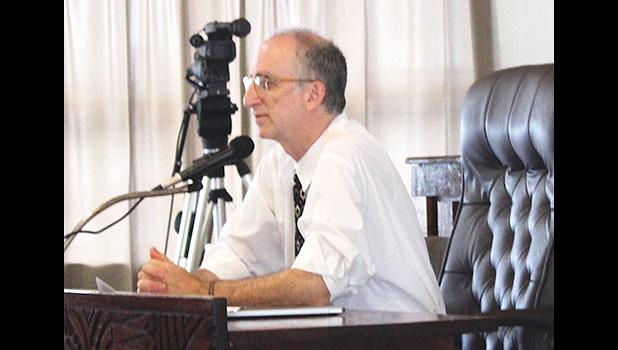 By
Fili Sagapolutele
fili@samoanews.com
ASTCA has made ‘zero’ dollars from the sale of Hawaiki cable bandwidth ~ CEO Lewis Wolman

Pago Pago, AMERICAN SAMOA — American Samoa TeleCommunications Authority (ASTCA) sharing with two other ASG entities, revenues earned from the Hawaiki cable capacity sale, adds an additional burden on ASTCA to operate, according to the authority’s chief executive officer, Lewis Wolman, who noted that his comments are based on his “perspective” running ASTCA on behalf of the board of directors.

Wolman was speaking Tuesday before the Senate Budget and Appropriations Committee  on an Administration bill, which earmarks and allocates revenues from bandwidth sale of the American Samoa spur of the Hawaiki Submarine cable, which is overseen by ASTCA. (See Samoa News Aug. 22nd edition for details.)

He told the committee that his comments on the legislation are based on his role as CEO of ASTCA. “From my perspective, running ASTCA on behalf of the board of directors” the bill “creates an additional difficulty for ASTCA because we will no longer get all the revenues,” he said.

“So it places an additional burden on ASTCA to operate — on behalf of the community — because some of the revenues it anticipated to receive and no longer being received, are allocated to [two] other institutions of the government,” he said.

While he can’t say if this poses a problem for ASTCA, “it makes it difficult for ASTCA to meet our business objectives [because] some of our revenues are not available to us,” he continued, noting some specific concerns about the bill, which talks about Hawaiki revenues. “And we haven’t yet sold any Hawaiki bandwidth.”

He explained that ASTCA has been spending a great deal of time and effort in selling bandwidth, but no such sale has taken place. However, ASTCA had been talking to “potential customers” about Hawaiki sales and what they would pay ASTCA covers a lot of services besides Hawaiki bandwidth, such as use of ASTCA routers, bandwidth, backhaul, fiber — all sorts of ASTCA resources.

“I’m concerned that if all of the Hawaiki revenues were divided, ASTCA will not be thoroughly compensated for its own resources,” he said. “So let me just say that the bill adds an additional burden on ASTCA as we have some business and financial obligations. That concerns me, in my responsibility as CEO.”

When asked where ASTCA is marketing Hawaiki bandwidth for sale, Wolman first informed the committee that purchase of the Hawaiki spur connecting Tutuila to the main Hawaiki cable and the purchase of the 200 gigabytes  “was a really smart effort, a purchase on behalf of territory, represented by the government” and dedicated to ASTCA.

“In the 21 century that we live in, we need to have a strong reliable connection to the world wide web and the investment was a good one financially, and a fantastic one for what I call ‘future proofing’ American Samoa,” he said. “So whether we sell any Hawaiki bandwidth through a third party, or not, the Hawaiki investment is a smart one.”

Wolman explained that ASTCA can sell access capacity to a third party —  such as Bluesky American Samoa, to independent Samoa by sending it across the Samoa/American Samoa submarine fiber optic cable, so it can include Bluesky Samoa, Digicel Samoa and CSL in Samoa.

By sending the bandwidth through Apia, it can be sent further to other Pacific islands, such as French Polynesia, Cook Islands, Wallis and Futuna, and Fiji. “All those countries have submarine fiber optic cable that come into Apia, where here in American Samoa, we don’t have direct ways to reach those other countries,” he explained.

“If we send it to Apia, other cables that come into Apia, we can interconnect with. So we’re looking at all those places I mentioned, places that we have reached out to, to see if they are interested in buying Hawaiki bandwidth,” he further explained.

Asked how much revenue ASTCA currently getting from Hawaiki revenues, Wolman said “zero”, adding that ASTCA is the only Hawaiki customer right now.

Senate Budget and Appropriations Committee chairman, Sen. Magalei Logovi’i pressed Wolman to provide any financial figures “so that we know what we’re looking at, at this moment” to get an idea of how Hawaiki revenues will be earmarked and allocated.

“The present figure is zero dollars. But putting on my best guess, having spent the last year working on trying to determine where the market is, I can say that in the years going forward, it will vary between zero and $5 million,” said Wolman, adding that the countries he mentioned earlier already have connection to fiber optic cable — in some cases two or three.

So if all those countries mentioned earlier all decide to buy Hawaiki bandwidth, “you’re looking at $3- 5 million dollars a year” going forward, he said. Sen. Fai’ivae Iuli Godinet asked if there is any chance of lowering the cost of bandwidth so ASTCA can sell more.

Wolman said the “bigger problem, is that all of our potential customers are now locked into multi-year contracts, which they already entered into with other vendor supply” submarine cables.

“So even if we went through the vendor, that we would like to sell you lower [cost], the answer is usually ‘come see us in 6 months or 24 months’ because they already signed a 24-month supply contract” with other vendors such as the Tui Samoa Cable, Southern Cross, he explained.

Sen. Tuaolo Manaia Fruean queried about reports that ASTCA was going to sell capacity to French Polynesia. Wolman explained that the French Polynesia telecom, OPT, last week issued a request for proposal (RFP). Deadline for submission is Sept. 27th and ASTCA will be  submitting a proposal.

He said OPT has asked for a proposal for 10 gigs, 30 gigs, 50 gigs, 100 gigs, 200 gigs and 400 gigs. “They want prices for all those,” he said. For the bill itself, the Senate yesterday approved in final reading its version, which now goes to the House for review and approval.