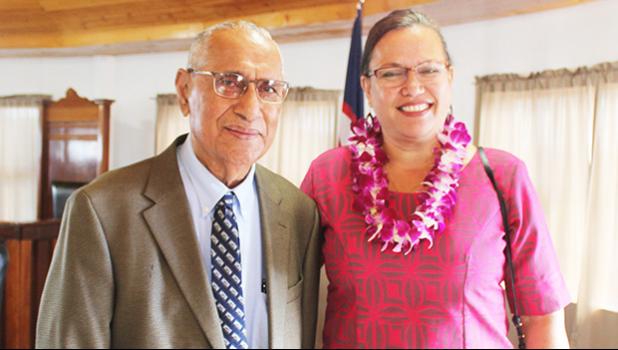 Pago Pago, AMERICAN SAMOA — Gwen Tauiliili-Langkilde was confirmed as the new District Court judge by the Senate in a unanimous 15-0 vote yesterday, which requires only Senate confirmation.

The vote followed a Senate Judicial Committee confirmation hearing yesterday morning chair by Sen. Tuiagamoa Tavai, who reminded his colleagues that the nominee, who is currently a District Court Judge Pro Tempore, is a proud daughter of American Samoa who returned home after her education and served in the government in many capacities including the Judicial Branch.

Tuiagamoa referred the committee to Chief Justice Michael Kruse’s letter, which recommended Tauiliili-Langkilde to the bench and shows the trust the court has on the nominee. (See yesterday’s Samoa News edition for details.)

Sen. Malaepule Saite Moliga says that the nominee’s qualifications and experience in the law and on the bench is unquestionable. He said that if confirmed by the Senate, Tauiliili-Langkilde will be the second female judge on the bench with the late Marry Betham being the first female judge.

The Manu’a senator thanked Gov. Lemanu Peleti Palepoi Sialega Mauga for agreeing with the Chief Justice and also for nominating a female — a native daughter of American Samoa to the bench. He said that nominating a female is a great blessing — “fa’amanuiaga” — to all females of the territory.

Sen. Magalei Logovi’i, recalled the time he was on the American Samoa TeleCommunications Authority (ASTCA) board of directors a few years ago, along with Sen. Fai’ivae Iuli Godinet and Tauiliili-Langkilde was the legal counsel for ASTCA and did great work, with honesty and dedication.

Fai’ivae agreed, and praised the nominee, saying that “we have worked together” for a long time and ASTCA, noting that “one of the successes for ASTCA with the Hawaiki cable” was due to the nominee’s legal work on this project.

Senate President Tuaolo Manaia Fruean, a retired Associate Judge of the High Court, recalled for the committee several years ago while he was a judge on the Appellate court case, and Tauiliili-Langkilde represented the government.

Tuaolo said the presiding judge on the Appellate at the time was from the US and that judge was very impressed with Tauiliili-Langkilde, who the off-island judge commended for being well prepared during arguments.

(Samoa News notes that a few years ago, the Secretary of Interior would appoint a judge from the US to preside over cases that go to the Appellate Court.)

And when he later became the Chief Election Officer, Tuaolo said the nominee was the legal counsel for the Election Office and did great and honest work.Tuaolo said he can testify to Tauiliili-Langkilde qualification, character and experience.

“You’re too young to be a judge,” said Tuaolo, adding that he believes that only individuals close to retirement age get the judgeship on the bench.

While that statement garnered smiles and laughter from the committee, Tuiagamoa told the nominees that although she is young in her appearance, she must always thinks as an adult, in making the right decisions on the bench.

Other senators also praised the nominees and wished her the best.

In her closing remarks, at the end of the 15-minute hearing, Tauiliili-Langkilde publicly thanked the governor and the chief justice for their trust in her and nominating her to the post, and that if confirmed by the Territory’s traditional leaders in the Senate, she will serve on the bench with integrity and honesty, for the benefit of the people and government of American Samoa.

Several family members of the nominee were in the gallery during the hearing. There was no information at press time as to when Tauiliili-Langkilde will take the oath of office, for her new post.