Rising sea levels are threatening homes in many east side villages 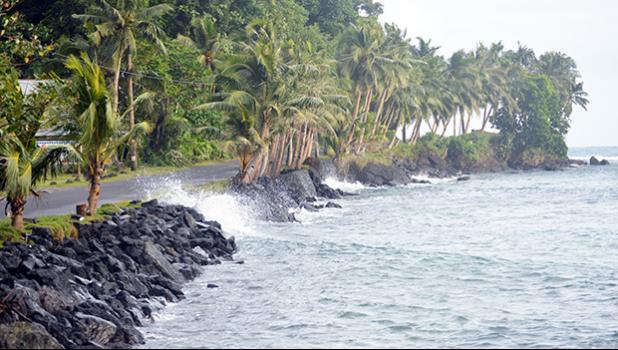 Is it a natural phenomenon or does it portend the end of time, many are asking?
By
Ausage Fausia
ausage@samoanews.com

Pago Pago, AMERICAN SAMOA — It came “out of the blue”. The current rapid rise in sea levels causing water to reach their doorsteps, is why many villagers on the east coast of Tutuila are living in fear.

While others are confident that the rapid rise of the sea level is a natural phenomenon, the result of the weather, others believe that this is another sign of the times as revealed in Revelations — that when these things happen, it’s foretelling that we’re living in the end of time.

The villagers of Aua, Lauli’i and Amouli shared their concerns about the rapid rise in the sea level, which they say is triggering panic amongst the families.

“It was new to see the sea water come up that high,” Tanielu Filiki of Aua said this week, in an interview with the Samoa News.

“This is the first time I have seen the tide this high, and you could even paddle your canoe, where the grass was on Monday. Compared to previous years and even during Cyclone  Gita (in 2018), the sea water level was nothing compared to what we saw since last week and this week too.”

The 64-year-old father of six recalled that they noticed the changes in the sea level on Tuesday and “it got really bad on Monday,” which he said made it difficult for their family car to be parked in front of the house. Moreover, vehicles were hardly able to make their way on the road due to debris that covered the road from the high sea level.

Small pools of water in front of the family home, when this reporter visited the village this week, is the only evidence left of the natural phenomenon.

Mrs. Filiki said she has already sought help from their Representative (faipule) asking for a seawall to prevent the land from eroding into the sea and also for the safety of everyone.

The mother was told that an application to build a seawall for their village is not easy to accomplish, due to the fact that the American Samoa Government (ASG) has to approve funding for such a project.

Three villages down the road is Aua, another community that was badly affected by the sea level rise these past two weeks.

“It was unlike anything I have seen at our area since I have lived here,” said Mapusua Puni of Aua.

The father of four said the rapid rise in the sea level occurred on Sunday evening at around 7pm and it reoccurred Monday and Tuesday.

“As you can see from the debris from the sea water, it came past our house to the front door, all the way to the other side of the road,” Puni said, pointing to the road that is about 8 meters away from his door steps.

“If you also look at our outdoor kitchen, it has already claimed it and is rapidly swallowing up the rocks to the back of our house. What happened on Sunday night and this morning (Monday morning) was unbelievable and it’s hard to explain it, unless you have seen it yourself.”

Since the event on Monday, seawater has reached the back of the houses of the family together with their neighbors.

“Last night (Monday) the waves were crushing on the cement of the house. We took our children with my wife and waited on the other side of the village… we panicked and we were unsure of what was happening – if it was a tsunami or not. It wasn’t until the sea water lowered later on last night that we felt it was safe to come back home.”

According to Puni, if there is something that can be done to assist them, it would be a seawall. “There is no seawall to defend us from the rising sea level, and if something does happen at night, our children and elderly are the most vulnerable ones.”

“Our plight and I know all of us living in this area are in need of the Government’s help to provide that seawall for our safety. I am afraid for my children, and I am afraid that when we are not at home with them, something might hit us and we will be too late to help them. So what we do now is we take the children to our relatives inland if we are not at home, just in case something happens. It is a lot of moving around but my children’s safety is my priority.”

When he was asked if he had any plans to relocate with his family and move inland, the father said it is their last resort.

“If the Government does not respond to our needs for a seawall, and we see that worse is coming, then that will be our last option,” he said.

“My wife grew up in this home together with our four children and her ancestors. This is the home they have known all their lives, but if our children’s live are at risk then we will move… we will rebuild our home again at any cost. But my only plea is for the Government that stands for our people to hear us out and please help us.”

A neighbor and a 68-year-old grandmother of four, Telesia Finauga, echoed similar sentiments.

Living in an open house with her two daughters and granddaughter, Mrs. Finauga was unable to sleep on Monday night.

“I worry at night for my grandchildren,” she said.

“It is frightening to think of what will happen when we are all asleep. The seawater came up near our door, and on Monday the water covered the field. We have not planned for this, but one thing for sure is it can happen again and we need to prepare for it.”

Mrs. Finauga said while her daughters had discussed the possibility of rebuilding their home, with the number of grandchildren she now has, she is unsure of those plans.

“I was always worried about the seawater at the back of our house because we hear a lot of talk about climate change,” she said.

“I told my children there was no point in renovating the house when the seawater could easily damage it. We want to move inland, that is something I have been thinking about, but the only problem is that will cost us in terms of clearing land and building another house.”

The 68-year-old mother said the sole breadwinner for their family is her son-in-law, who is a police officer and relocating will cause a lot of financial stress for her family.

“I have been very reluctant about the idea of relocating, but if it will affect my children and grandchildren, we will move and start from scratch again. I also fear that when the time comes and I pass on, this will be a problem that my children will face and have to live with.”

The mother also pointed to her husband’s grave is in front of her home, and said not only did the seawater wash up to where her husband is buried, but had also washed away her garden that she now has shifted into planting pots and placed on shelves.

“It was quite different and it is something that you will always remember,” said Mr. Konelio.

“All my life I have lived here and the sea level had not come up this high. But on that day I was shocked to see it wash up on the other side of the road, and it brought a lot of rubbish with it.

“I only hope we can get some kind of help from the Government or from donor countries.”

Samoa News also spoke to people from other villages on the east coast, including Lauli’i and Amouli, and they shared the same concerns.

An elderly mother from Amouli told Samoa News that a solid sea wall is the only answer to all of the concerns.

“We can say what ever we want to say, but if our government’s leaders refuse to respond to our cries, our words will only fall on deaf ears. Someone needs to stand up and respond to the problem. We don’t know what is going to happen with the rapid sea level rise over the next two years or more. Our government needs to act immediately,” the elderly mother said.