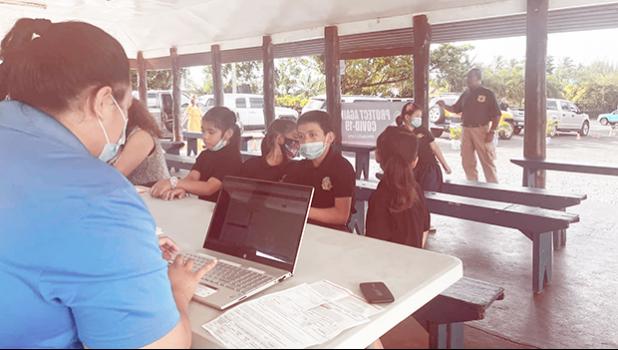 Pago Pago, AMERICAN SAMOA — Just over 1,800 shots were administered for COVID-19 at ten sites during day-one of the government mass vaccination drive on Wednesday for the Central District, which had it’s second day of vaccination yesterday, according to preliminary Health Department data.

Teams were dispatched Wednesday morning to the vaccination sites that opened at 8am, — which were mainly at school campuses — followed by a de-briefing when the sites were closed and teams returned to the DoH compound in Tafuna.

According to the preliminary data, a total of 1,831 shots were administered on day-one, and the total amount includes those getting the first or second shot, as well as individuals who received the booster shot.

The rest of the vaccination sites received fewer than 100 individuals wanting to be vaccinated.

Health and ASG officials are pleased with the turnout especially the age group of 5 to 11 years old that were there to be vaccinated — as well as individuals who had received the first shot, but never got the second shot.

Specific breakdown on the number of children vaccinated — ages 5 to 11 years old — was not available at press time.

Incentives available during the mass vaccination drive are goodie bags and $100 cash, which is for only first and second doses for children and other eligible individuals who are not ASG employees.

The $100 incentive, however, was not immediately available at one vaccination site when people showed up early just after it was opened, as staff from Treasury Department had not arrived, according to information received by Samoa News.

Treasury staff is responsible for monitoring and giving out the incentive. And when those who didn’t get the cash heard later in the morning that Treasury were onsite, these individuals returned to get the $100.

Meanwhile, a DoH information sheet shows the results of a survey conducted by the American Samoa Cancer coalition before the 5-11 year old age group was eligible to get the vaccine.

The organization wanted to understand how confident the community is about getting vaccinated. They interviewed 789 people — and almost 80% of the people who took the survey said that they got vaccinated to protect their health or their family’s heath, according DoH information sheet.