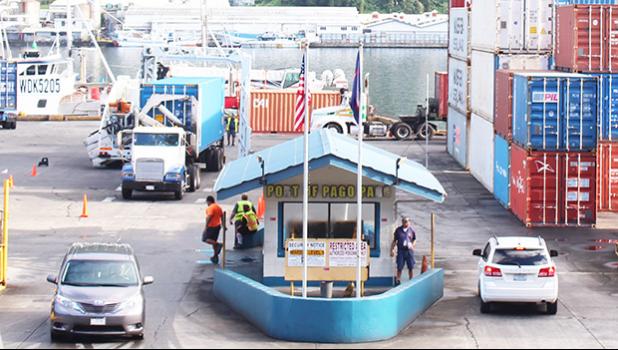 Pago Pago, AMERICAN SAMOA — The Port of Pago Pago was back in business yesterday with containers being hauled out by trailer-trucks with much needed supplies, which arrived over the weekend when two cargo vessels were finally able to dock late Saturday.

Meanwhile, the Samoa government owned Fotu-o-Samoa vessel, which delayed arrival last week due to severe weather conditions in the two Samoas, is now scheduled to arrive tomorrow, Thursday. It will be bringing only cargo from Samoa.

ASG is planning on chartering two voyages of the Fotu-o-Samoa for the Manu’a islands that have been without ocean transportation service for about a month. The trips to Manu’a are to take all necessary supplies and equipment to the island group that suffered damage during severe weather conditions from the monsoon trough early last week.

At the Airport, ASG has charters set for this week with Samoa Airways to take crew and urgent supplies to the island group. The first charter was Monday and ASG agencies have been informed of the dates of future charters so they can plan accordingly to have staff on board.

Samoa Airways also has its scheduled Manu’a flights in place.