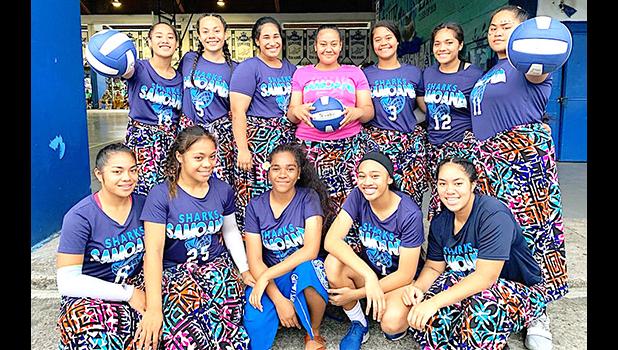 The outrage centered on the fact that an announcement was made that there would be no playoffs this year, and the title would be given to Samoana — with one loss — a clear contradiction of ASHSAA bylaws that state that playoffs are only canceled if a team goes undefeated during the season.

On Wednesday evening, when contacted for comments, Tafuna High School head coach Lydia Faleafine-Nomura said a playoff is “a moot point now.” At that moment, she had not been notified of the play- offs, which were then set for the following day — although her team was scheduled to play — and she only found out about it from another volleyball coach.

“Everyone is saying that I am pushing it for personal reasons, but that’s not true,” she said. “I have been pushing it for years... I am just so grateful that the [DOE] director is supportive.”

According to her, “There are so many female athletes that have gone off to college because of this sport,” and, with regards to the issue of playoff games, “using finances as an excuse is unacceptable.”

Faleafine-Nomura said she was prepared to take the matter to court. “ASHSAA bylaws require them to have playoffs. Unfortunately, they change the rules whenever they feel like it, with no good reason. Simply, they don’t care. For heavens sake, the girls on average only play 7 to 8 games in a season. That is unheard of anywhere else. We practice in the spring, and from June to August. The season is over in 3 weeks!”

In a statement to Samoa News, one parent wrote, “In all fairness, we have voiced our concerns about a playoff since the beginning, before the league even started... Now we are in a bind, with some leaders refusing to follow through with what used to be — shades are being thrown everywhere. Look at the bigger picture. Not one or two teams deserve a chance in all of this. We can accept whatever decision is being made, but make sure it’s the right one! Waiting for ASHSAA to make the right calls is like waiting for snowfall in Samoa.”

A coach who spoke to Samoa News but didn’t want to be named, pointed out that Samoana was not undefeated and therefore, based on ASHSAA bylaws, there should be a playoff.

According to the coach, a vote was taken on Monday — the same day her team played their last game — that there would be no playoffs, and the standings at that point would suffice:

“What we are fighting for,” she explained, “is the fact that they just announced that there will be a playoff for football because there isn’t an undefeated team. Why not do the same for these girls?”

Samoana supporters celebrated their championship following their last game early this week. According to a coach who spoke to Samoa News on Wednesday, “ASHSAA is trying to say it’s too late for a playoff, but they obviously made their announcement to Samoana only, without notifying all teams.”

At around 6p.m Wednesday, a coach who was notified by ASHSAA that there was going to be a playoff the next day (yesterday) told Samoa News she was shocked. “We have no choice but to go along. I’m pretty sure they did it on purpose, because they’re angry about their own decision being overturned.”

The playoff schedule has Tafuna playing Leone, and Samoana squaring up against Fagaitua.

“I feel it’s only fair for the female athletes to get the same opportunities as the football athletes,” wrote one parent to Samoa News. She said two of her daughters play. “They spend so much time practicing and they have already cut back playing times.”

She said the girls practice for 3 months, only to play in 6-8 games. “That’s the amount of games they play in two-day tournaments off island. And then to cancel playoffs? If there was an undefeated team then it makes sense... but there is no undefeated team.”

She said JV games only go up to 17 points, and many games were canceled this season after one school got disqualified and another pulled out early in the season. “These girls work and sacrifice so hard to play their hearts out. A lot of these girls are seniors and looking/ hoping to getting volleyball scholarships after graduation. They need as much playing time as the football boys.

“I really don’t understand why ASHSAA and all these high school principals voted BEFORE the season started NOT to have playoffs. The very people who should be helping and mentoring our girls are short changing them before the ball is served across the court.

“I don’t care who wins the championship; the bottom line is giving the same chance to our female athletes to showcase their skills and afford them the opportunity to attain their educational goals. I don’t see ASG handing out scholarships to our volleyball athletes.”

The frustrated mother said she has to film her daughter’s games herself and send the footage to prospective colleges off island “in the hopes that she’ll be offered a volleyball scholarship” because “ASG doesn’t do anything for them.”

“They focus mainly on the football boys,” she concluded.

Samoa News reached out to DOE Director Dr. Ruth Matagi-Tofiga yesterday morning and according to her, the playoffs — from what she was told by an ASHSAA official — are now scheduled for next week.

The girls volleyball league started Sept. 9th for varsity and JV. The first round closed out on Sept. 25th and according to what Assistant Director of Athletics, Li’atama Amisone, told Matagi-Tofiga, no team had an undefeated record, and Samoana was in first place with one loss (varsity).

Matagi-Tofiga said that under ASHSAA bylaws, for other sports except football, the best record determines standing in the JV division after two rounds — no playoff. For varsity, there is a semi- final and final.

“The only person that can overturn ASHSAA decisions is the Director of Education. In this case, it was clear that a playoff should be in place,” Matagi-Tofiga told Samoa News yesterday. “As the Director of Education, I reminded the ASHSAA body of giving the opportunities to our girls to showcase their talent, affording them opportunities to procure athletic scholarships to further their studies abroad.”

She then provided a list of local female athletes who went to college on athletic scholarships and graduated:

“One student that stands out for me personally, because it was during my tenure at Tafuna, is Christabelle Mariner Hamilton, who got a full ride scholarship to Eastern New Mexico University,” Matagi-Tofiga shared. “I am proud to say that Christabelle played at ENMU from 1999- 2002, earning All Lone Star Conference Division honors three times. In 2009, she was inducted into the ENMU Hall of Honor. In 2011, she was hired as the head coach of the women’s volley- ball team at Xavier University in Lousiana and in 2012, she was named Conference Coach of the Year.”

Matagi-Tofiga concluded, “All these stats should make all of us educators proud of what our students are accomplishing from the limited resources that we have. Therefore, let’s give every opportunity that we can provide to ensure that our student athletes pursue their endeavors locally and abroad. The Department of Education wants to ensure that fair treatment is given to boys and girls sports.”