Palolo hunters out over the weekend —big hauls in Savai'i, disappointment locally 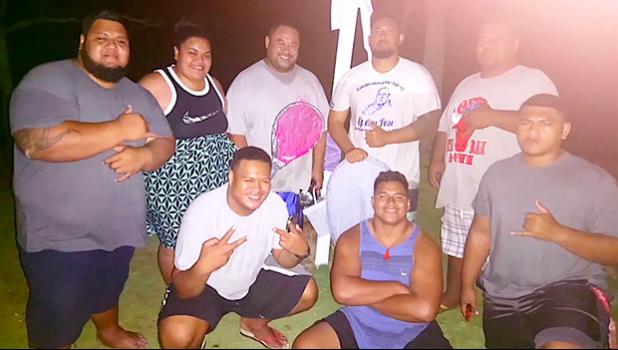 Pago Pago, AMERICAN SAMOA — These folks from the east side were at the beach in Laulii Tuai in search of palolo, which was predicted to rise during the wee hours of the morning — over this past weekend — exactly 7 days after the third quarter full moon, the usual predicted time of the palolo rise.

There was a weak palolo showing at a little past midnight Saturday, and the swarm was a little better at around 2a.m Monday morning — but still not enough to satisfy the cravings of the hundreds of people who lined the shores and took to the waters in different parts of the island in search of the delicacy, which usually appears once —  but sometimes twice (October and November) — every year.

People of all ages came armed with homemade nets, flashlights, and buckets, anticipating a big catch. Small ‘alia boats sailed out to the open water, but there has been no official word yet, on how much palolo — if any — was caught.

Locals were expecting favorable results this year, based on the recent wet weather conditions.

Fika, Sala, and LJ were anticipating a strong palolo rise this past Monday morning. Like the rest of the territory, they were disappointed. [photo: B. Chen]

It was the Big Island of Savaii that hit the mother lode over the weekend, with residents hauling palolo in by the buckets. Social media has been abuzz with Savaiians selling palolo off, for as much as $50,000 per cooler.

A lady who sells seafood at the fish market in Savaii went LIVE on Facebook, trying to sell off a 1/2 gallon jar of palolo for $1,500 Samoan Tala; and a pint-size jar for $700 Samoan Tala.

Residents of the Manu’a Islands reportedly got some palolo over the weekend too.

When contacted for comments yesterday, an official from the Department of Marine and Wildlife Resources (DMWR) told Samoa News that the official data from the weekend palolo craze has not been finalized yet — as the crew had worked throughout the night and therefore, took the day off yesterday.

Sione Pese and a friend, waiting patiently for palolo to rise this past Monday morning on the east side. [photo: B. Chen]

There are over 14 species of the palolo worm and in the Samoa region, if there is a spawning, palolo generally will rise for up to three nights — only for a few hours starting a little after midnight — in October and/or November.

Locals are disappointed but are anxious to see if November will bring better results.