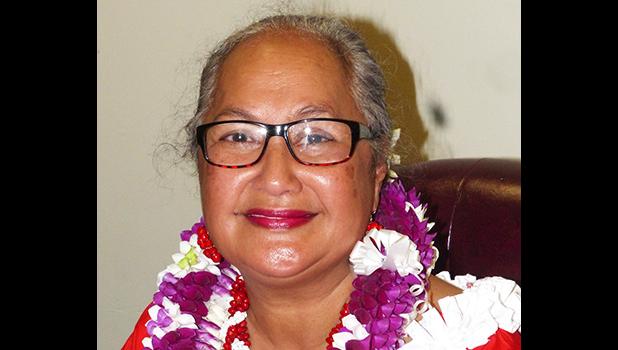 Claims the board is micro-managed by the Governor's advisors/consultants
By
Blue Chen-Fruean
blue@samoanews.com

Pago Pago, AMERICAN SAMOA — Fofo faipule Rep. Andra Samoa says she is both "relieved" and "happy" with Governor Lolo Matalasi Moliga's decision to remove her from the board of the American Samoa Telecommunications Authority (ASTCA).

(A letter signed by Lolo on Dec. 26, 2018 removes Samoa and Sen. Faiivae Alex Iuli Godinet as members of the ASTCA Board. The two have been replaced by the Governor's executive assistant Iulogologo Joseph Pereira — who is now chairman of the ASTCA board — and Alema Leota, the Governor's assistant legal counsel. See yesterday and today's Samoa News front page for details).

According to Samoa, the letter was hand delivered to her on Dec. 27th.

She said she was 'expecting' to be removed from the board for a while. As she tells it, she accepted being an ASTCA board member when the Governor called her directly. "I would think that the Governor and his advisors would have more class and respect in treating any board member who would be removed," she said. "I did not seek out to be a board member and, of course, I could have refused; but knowing that this would be an opportunity to make a difference and share my experience of being a former ASPA CEO as well as being excited with the application of technology, I accepted."

Samoa said the entire year she served as an ASTCA Board member was "a struggle" for the Board "as we were told, 'this is what the Governor wants, and he is the Governor'."

"So when the Governor wants something and the Board, collectively, through due diligence, knows that it is not following due process — transparency and accountability — then where is the fiduciary duty of the Board to do what is right?" she asks.

"We need leaders who fear God and do what is right, considering the interest of our people. All we can do is pray and stay strong in our values and principles," she continued.

Samoa says that her removal gives her time and energy to focus on how to be "an effective member of the Legislature in order to meet the needs of my Leone village and also the people of American Samoa."

She continued, "…sad knowing that during my time as a Board member, since September 2017, our fiduciary duty as a Board to promote transparency and accountability, being that ASTCA is still a public organization, was considered undermining the process and agenda of the Governor and his consultants/advisors. I had expected to be removed as my efforts in questioning the current management did not cease. It is pure hypocrisy to be using an excuse referring to a policy and the separation of power principle. There is no separation of power and no checks and balances being practiced. It’s all rhetoric."

Despite all that, Samoa thanks Lolo for the opportunity "to be engaged with the hard working employees at ASTCA and realizing that ASTCA’s problem is a self-inflicted approach of selectively excluding others to expedite an agenda that is not transparent and in the interest of the people."

With regards to the $4.5 million payment ASTCA made to the American Samoa Employees' Retirement Fund (ASGERF), Samoa said the Board was instructed by the Governor — via a written letter and also in a meeting — that only Adolfo Montenegro and Barry Rose are to be his official representatives to negotiate and meet with ASGERF and Hawaiki.

"The Board did not know of a $4.5M payment until we read the news," Samoa said.

Referring to observations by the public that ASTCA board members are left out of the loop regarding the agency's operations, Samoa said, "The Board is being micro-managed by a selective team of consultants/advisors to the Governor. However, the final decision is with the Governor.

“If the Board continues to serve without loyalty to the mission of ASTCA, and the rule of law, then the people will suffer.

“I hope the current Board members will have the courage to look into the many contracts of consultants that have been unilaterally processed without due process and accountability, considering cost containment and especially, the application of technology to generate revenue."